The Ford Bundle Kit came standard with the PlayStation console, the PlayStation Carry Bag, this demo disc, and advertised the Gran Turismo 2 game. The power adapter seems to have been randomly sourced. Below is the bundle in full minus the Power Adapter. The Brochure that with it explaining everything is also featured.

Flyer for the arrival of the PlayStation hardware to be installed. 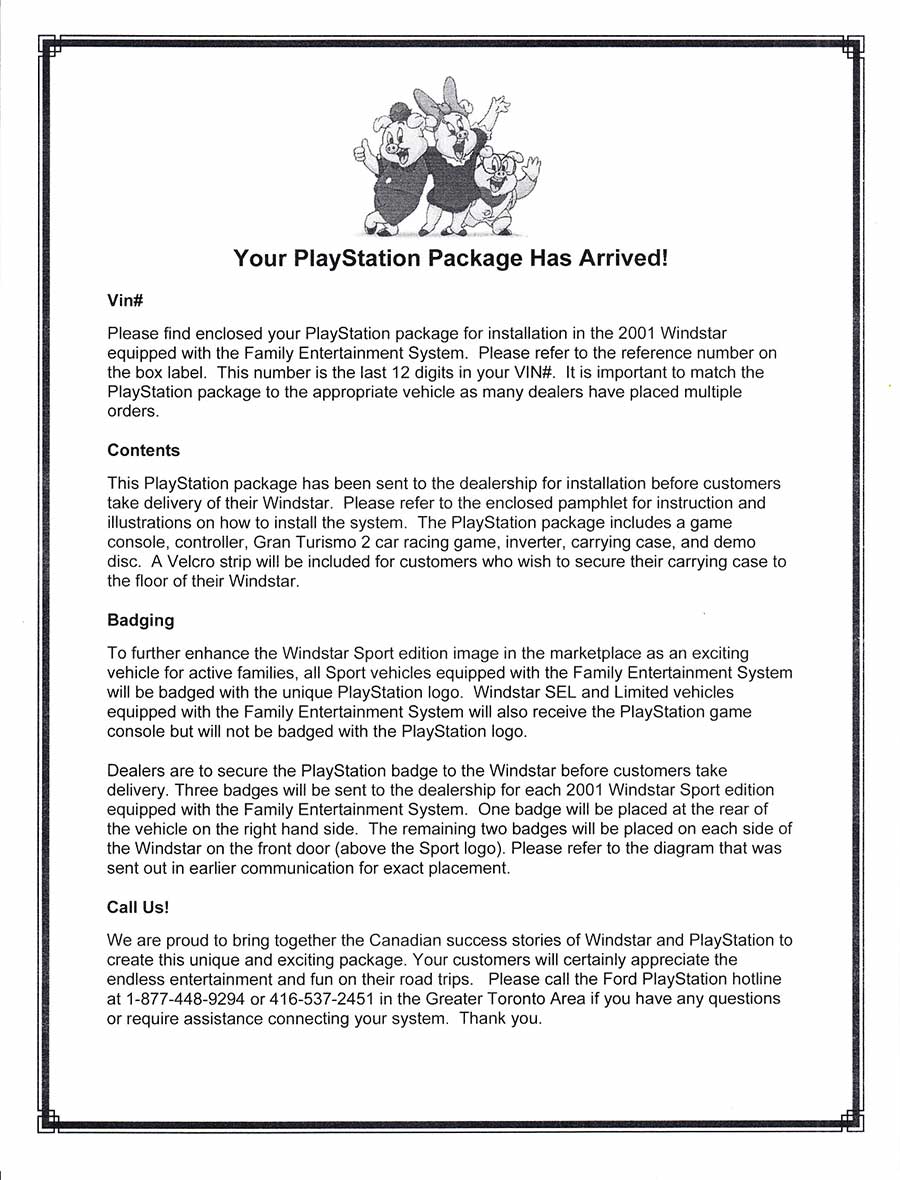 This is a variant of the PlayStation Demo Disc 2000. Pictures and links to be added at a later time.

The Ford Bundle is a curiosity because as of this page’s publishing date (March.2020) there are two parts that have already been discovered to not be standard. A fellow collector sent images of his bundle. Their version included Ford Racing while mine came with Gran Turismo 2. The latter is featured in the pamphlet, so it’s unclear why the former was in the other bundle.

Their kit also included a 3rd party power adapter for the Windstar’s console, while mine did not. It’s unclear if my version’s previous owner had kept it or never got one. The systems and bag did match though.

While the sleeve is the true variant, the disc is actually a reprinting of the ‘PlayStation Demo Disc 2000’ – which makes this a 3rd variant and the hardest of the 4 versions to find with the Wal-Mart version coming behind it.

The opening is a video ad for the PlayStation Underground Magazine, and once you get to the playable demos, you have the following options:

The PlayStation and items came as part of the “Family Entertainment System” (Wait…that sounds…familiar…) that was an option for the Ford WindStar mini-van. Note that everything apart from the demo and brochure were standard retail items with no variant angle. Since there was no outer box to hold it all, you could easily assemble the entire thing in pieces and call it a day.

Clicking a screenshot will bring up a pop-up gallery.

I discussed the Ford Demo Disc when I originally acquired it way back in…2013. I am so old.

This was the teaser video of me opening the sealed disc only to realize it was just a sleeve variant.