The original Black Label Release pictured above, Ver. 1.0 – is the “Base Color” version. In order to properly show the disc color, we had to photograph it, as scanning proved too much to color correct. This is the earliest version of 1.0 that we have, so we have used it as the ‘base’ version when illustrating the variants. These changes in the print jobs are more than the likely the culprit behind people’s beliefs that there were code differences between the mysterious ‘orange’ and ‘brown’ printed discs. 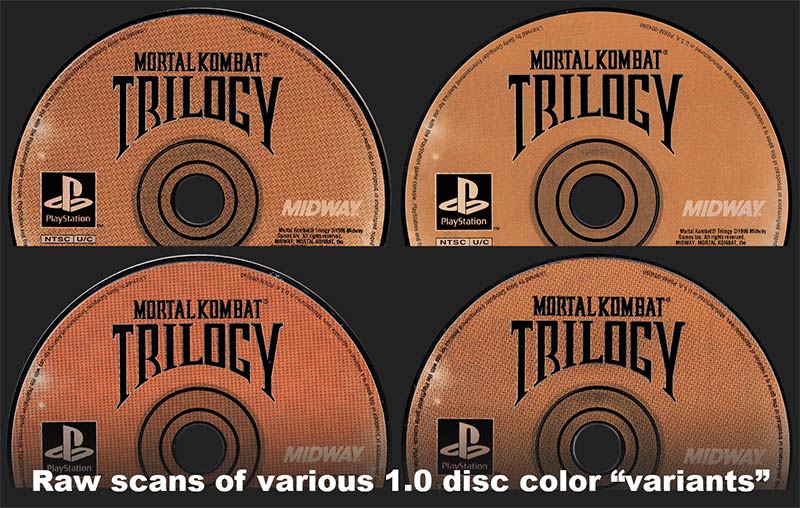 Black Label Release – Ver. 1.0 – Strictly nightmare fuel, the Mortal Kombat Trilogy discs have at least 5 known color variations – all due to the way the same art file was printed. Meaning it’s more of various printing issues than actual true variants. These are raw, untouched / not color corrected scans of the discs to illustrate how wide a net these dis-colorings cast.

Moral Kombat Trilogy carries over a few of Mortal Kombat 3’s tricks, but brings its own as well.

Good times to be had with a few simple button presses.

This becomes accessible after you have either won an 8-Player Tournament or finished 1-Player Arcade Mode. If you access via the 8-Player Tournament, all 12 choices are selectable. If you go for it during Arcade mode, you will be handicapped by your Difficulty Tower. Novice will give access to the first 4 choices; Warrior the first 7, Master the first 10, and then Champion gives you all 12 to choose from. Here’s what you’re fighting for:

After you pick your characters but before the fight starts, a Versus Screen pops up with 6 tumblers at the bottom of the screen. Player 1 controls tumblers 1-3, and Player 2 controls 4-6. There are 10 possible icons that can be placed in each tumbler, with each players’ HP, HK, and LK manipulating their individual boxes. Each icon is assigned a number, so if you wanted to enter the code 1-2-3, it would  HP (x1), HK (x2), and LK (x3). This would produce the visual tumbler of MK Logo, Yin-Yang, Number 3.

The Icons and their number assignments are:

If you press and hold Up while pressing the buttons, you’ll count backwards. So if you needed to get to 8, you could hold Up and then press the respective button twice to reach it. This would be shown as -2 in some guides. The codes and their respective effects: