For those younger readers and fans, let me tell you the tale of a magical place called ‘the arcade’. It was this dimly lit, neon-tubing everywhere, exotic place where giant machines took your quarters or tokens and provided amazing game experiences. Players stood shoulder to shoulder, whether they were with or against each other in the on-screen endeavors. Trash talking was relatively clean, no one insulted your mother (unless they had a huge temper) and every so often a random 8-year old Japanese kid would destroy you in a Street Fighter match.

While sports games did appear in arcades, very few ever reached the frenzied cult status that Midway would unknowingly create in the early 90s. While Double Dribble and Arch Rivals had their moments in the sun, NBA Jam would go on to become nothing less of a billion-dollar sensation. This led to the eventual creation of NFL Blitz and more, but for now we’ll stick with the NBA.

Jam is essentially the absolute core of basketball and nothing more; 2-on-2 with the only possible foul being goal tending. There are roughly three to four players per team, with more unlock-able once you beat the game. There are 3 buttons to worry about – shoot, pass, and turbo. On defense, they become jump and push with turbo.

What makes NBA Jam so damn fun is that this focus on the core aspects is meshed with the wacky exaggerations of an arcade atmosphere. Besides regular shots and throws, you can sometimes perform super dunks, massive air dunks, and crazy spin dunks. Some of these displays of hang-time can leap right high into the screen and come down with a monster slam. If you make three shots in a row, your character becomes “on fire”. The ball gains flames and you get a better percentage of made shots. This lasts until the other team scores or the computer thinks you’ve had enough.

Up to four players can jump in thanks to the Multi-Tap option, and each person can keep their own record via the PlayStation Memory Card or the Saturn’s Internal Memory. This was brought in from the arcade, a pretty crazy feature at the time. The machine, and now home consoles, can track all of your game progress, lifetime wins and losses, and your season. This was done by using three initials and a birthday. This way on the machine multiple users couldn’t access each other’s records (unless there’s a huge coincidence). What added to the fun was Midway hid themselves, and here in T.E., celebrity and mascot characters among the players. The proper initials and date could get you anyone from Benny the Bull to Hilary Clinton.

The game gets fairly frantic on the court – there’s so much shoving, turbo running, and ‘moon jumping’ abound that it can get easily confusing, especially with the mammoth heads code on. However, if you can keep the craziness straight, the game still holds up. How well? So well that you don’t even need the originals anymore, as EA has completely redone the game on Xbox Live and PlayStation Network. Which, truth be told, may be easier to get 4 people together than it would be at your house with 4 controllers and a multi-tap and a copy of the game.

NBA Jam was part of the PlayStation’s launch line-up, and though the series went through some rough spots, its legacy has been reborn and carries on.

You could even say it’s on fire.

NBA Jam T.E. is like that amazing movie you saw a million times and could still watch repeatedly. Sure, you know the ending, every move the characters will make, but damn if you don’t crack a smile every time you hear “BOOM-SHAKA-LAKA!” 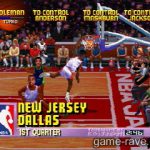 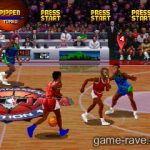 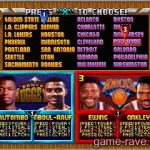 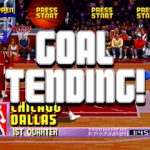 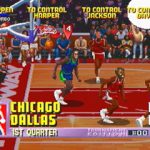 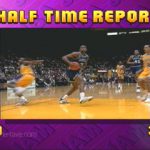 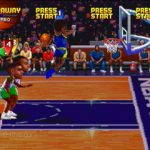 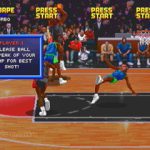 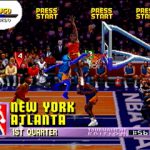 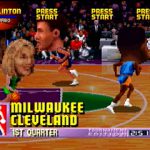 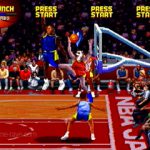 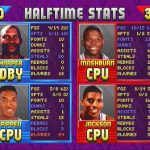 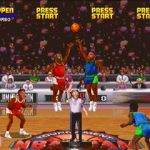