Crow: City of Angels, The

For the uninitiated,  The Crow started life out as a graphic novel written by James O’barr. Written as a way to cope with O’barr’s girlfriend being killed by a drunk driver, it followed the path of musician Erik Draven being resurrected from the dead by The Crow to avenge the death of him and his fiancé at the hands of a gang. The original graphic novel is one of the most memorable, heart-breaking, and mind altering reads a player will ever experience. A film version starring the late Brandon Lee was also created, and despite some liberties taken with the story, was still a fantastic, styled experience and is still one of my favorite films.

So of course Acclaim would swoop in with the movie rights to publish a video game for the PlayStation and Sega Saturn. City of Angels is a side-scrolling beat-em’ up similar to Fighting Force. Like in the movie, gamers control Ashe, a father who is murdered alongside is son brought back for some revenge by the crow. He’ll progress through several stages taking down each of the cult members who make up Judah’s massive army.

Ashe has access to punches, kicks, and a throw option. When confronted by a boss character, Ashe will gain additional throw moves to assist in defeating the various henchmen. Of mention is that the game is running off a modified version of the Perfect Weapon source code, which explains several of the issues at hand. Let’s tackle the control first, since that’s actually where I made a huge blunder in the original review.

Since the game is in 3D, movement is in 3 dimensions as well. When playing a fighting game, the developer needs to make sure that the control is tight, the hit detection is precise, and that one can get their ass out of a bad situation in a hurry. Regretfully all three of those responsibilities fall short, which in part led to my original incorrect assessment of the situation. Ashe uses what are lovingly called tank controls, akin to the Resident Evil series. Up and Down on the D-Pad will move our hero forward and backwards, while Left and Right turn him. In my original assessment, I thought the game was locking Ashe to the enemy he was fighting – which doesn’t happen.

This mis-read may have been caused by a janky controller, a glitch of the GameShark code I was using at the time, or a combination of other factors. So while he isn’t locked on to an enemy, the problem still stands that Ashe is outgunned and outmanned. With hand-to-hand combat, it’s more a battle of the hit detection boxes than anything else. Unless lined up just right, Ashe will whiff past his opponent. Sometimes using the alternate round house or backhand punch to hit them works, but the animations are so slow that it becomes a chore just to hit someone.

Ashe can do a backflip by pressing down twice, which in theory would get him out of a tight situation. This holds true until facing characters who are wielding shotguns and pistols. Unless Ashe has one himself and the player is an expert shot, expect to die instantly. Shotgun blasts can kill in two hits or less, and there are levels where the game starts Ashe out between two shotgun enemies with nothing to fight back with.

That said, there are some nice little touches here. If the player holds down the pick-up button, Ashe will automatically walk towards the nearest weapon and pick it up. While moves are few and slow, they are animated nicely, and each of the guns have unique animations, like the bullet shells flying out of the automatic and how Ashe re-loads the shotgun with one hand. Bottles thrown at Ashe will break into a lot of tiny pieces, a detail under appreciated since usually the player is being hit with them by an off-screen enemy.

Off-screen enemies are a plague thanks to a horrible design decision. In using the Perfect Weapon source code, the developers decided to add multiple camera angles to any given area Ashe is in. By example, in the starting level, a far away camera angle jerks to a super close-up view. Once inside the tavern, the same area can change views every few feet, causing extra load times and slightly dis-orienting side flips. A character on Ashe’s right may suddenly now be on his left if backed-up to a previous camera change. Every so often this will cause unintentional back tracking, since the directional arrow will only tell Ashe where to go once all the enemies in the area are defeated.

To further this situation, the AI programming seems to be confused by the angle changing as well.

On the positive side, this does allow for some up close visuals of the characters and levels, and that’s actually where the game shines a bit. The characters are really detailed, if a bit too tall looking. The backgrounds have some nice detail, but the color palettes could be a bit better. In trying to look just the like the movie, the game’s palette is reduced to blacks, browns, yellows, and reds. There’s something to be said about being as close to the movie as possible, but when the game is only using 5% of the color spectrum, it kind of dampens the visual mood. If there was a lot less camera angle changes, the visuals would have been better appreciated.

In combing through the game’s visual and controls finding the good and the bad, there is one area of the game that sadly gets no reprieve, and that’s the audio department. The Crow movies, even the bad ones, usually have excellent soundtracks with both orchestration and radio style songs.

Here on consoles, none of the music that could have been licensed is present, and the music that is there is jarring to say the least. The music has several tracks, but they are insanely short and repeat infinitely during a play-through. Rather than the gothic, gloomy overtones of the films, the audio team went for something that sounds more gritty and technical, like it was intended for a Rise of the Robots sequel.

With it clearly not matching up to the onscreen activities, it acts as a distraction rather than compliment. The sound effects are fine, but the character voiceovers are uninspired and sometimes comical. Most villains are reduced to one word shout-outs of “PAIN” or “DIE” or some other drivel. There are several instances where the voice-overs are either mis-cued or assigned to the wrong villain as well. The overall audio experience is shoddy at best, but also reveals just how rushed the end product may have been to tie in with the movie’s release.

As an overall package, tied with the hindsight of this re-review, The Crow City of Angels is a bad game, but not as bad as I originally scored it. Having given it a 2-out-of-10 “Miserable” score, that implies it’s on the same bottom rung as Alone in the Dark 2 which was an absolute hot mess from top to bottom. Having played it again, and having to still play again for screenshots and the eventual Saturn version of the review, The Crow: City of Angels gets a new score of 4-out-of-10  “Upsetting”. Like the movie it’s based on, City of Angels takes something once amazing and inspiring and reduces it to a face palming, head-scratching version of itself.

Even ignoring the dumpster fire that was the movie, the PlayStation Crow game is a bit too close to it’s source material: it’s the sad tale of a potential great follow-up that dies a death more tragic than any character in its lore. 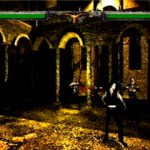 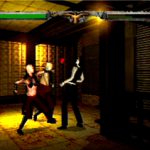 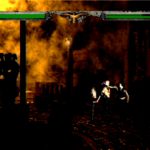 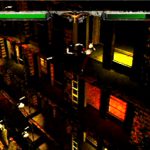