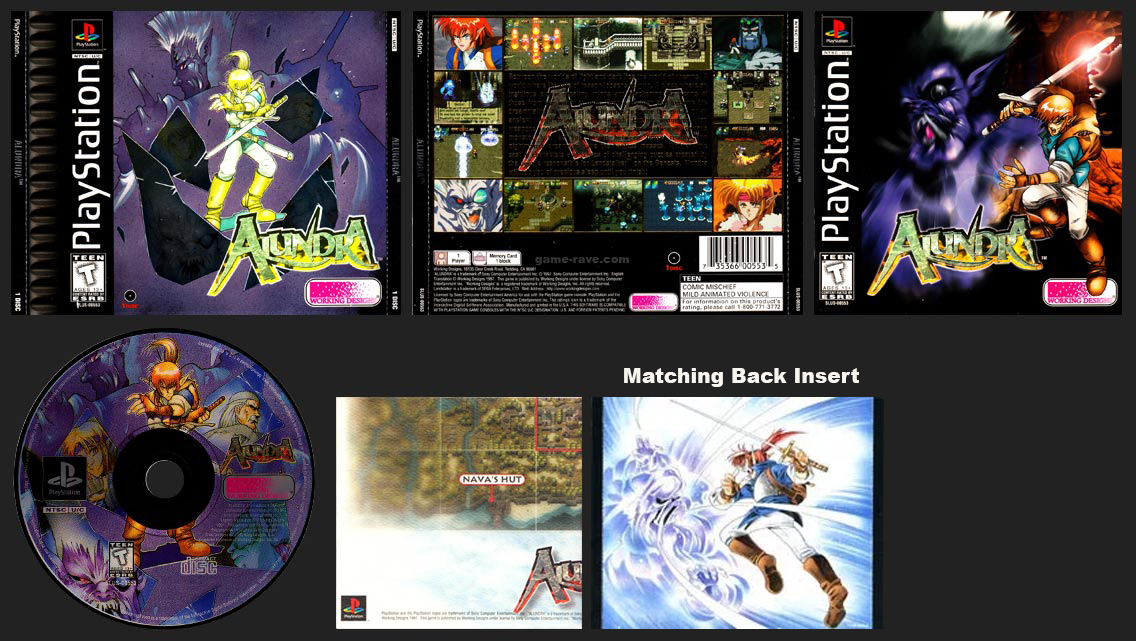 Alundra is one of the most prolific variant released on the PlayStation, and one of the original variant hunts that started Jason down his dark path of collecting every known variant. There are 8 total variants – Original, and then A through H, but with no F. According to Victor Ireland, for whatever reason Sony never approved that particular submission. The back inserts are tied to the disc art via the PSRM number located on the insert’s inner bottom right corner. The shared back insert is the same PSRM despite being used across three disc arts.

The missing artwork would have been the shop owner and father-figure Jess, using the same design as the light blue background disc art that shares the same back insert.

You can check out all the Working Design games in one page here. 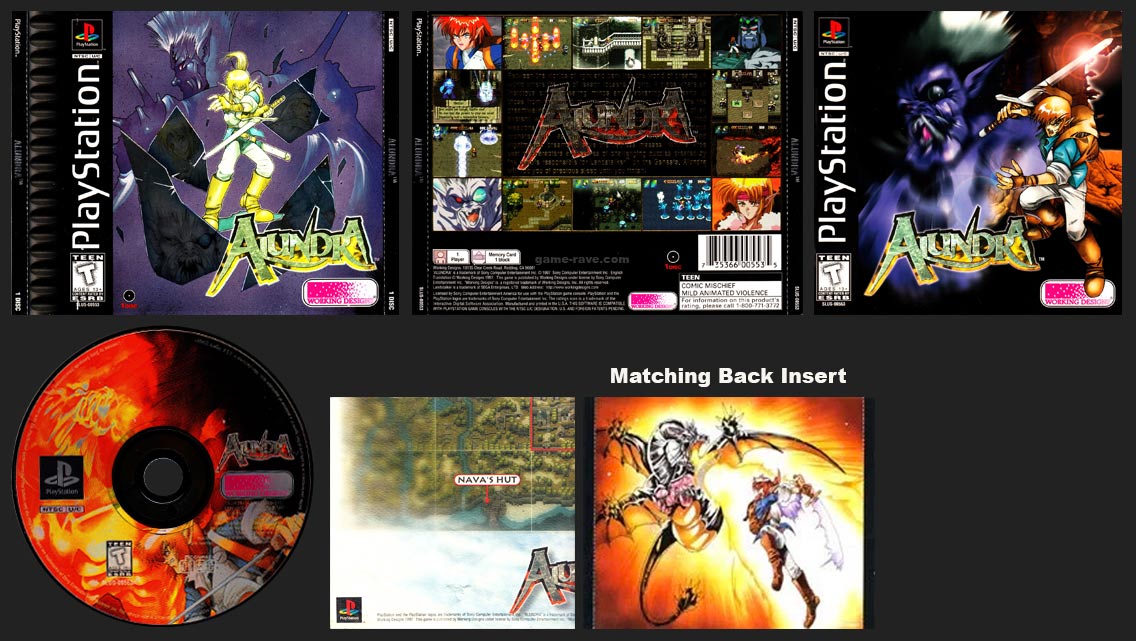 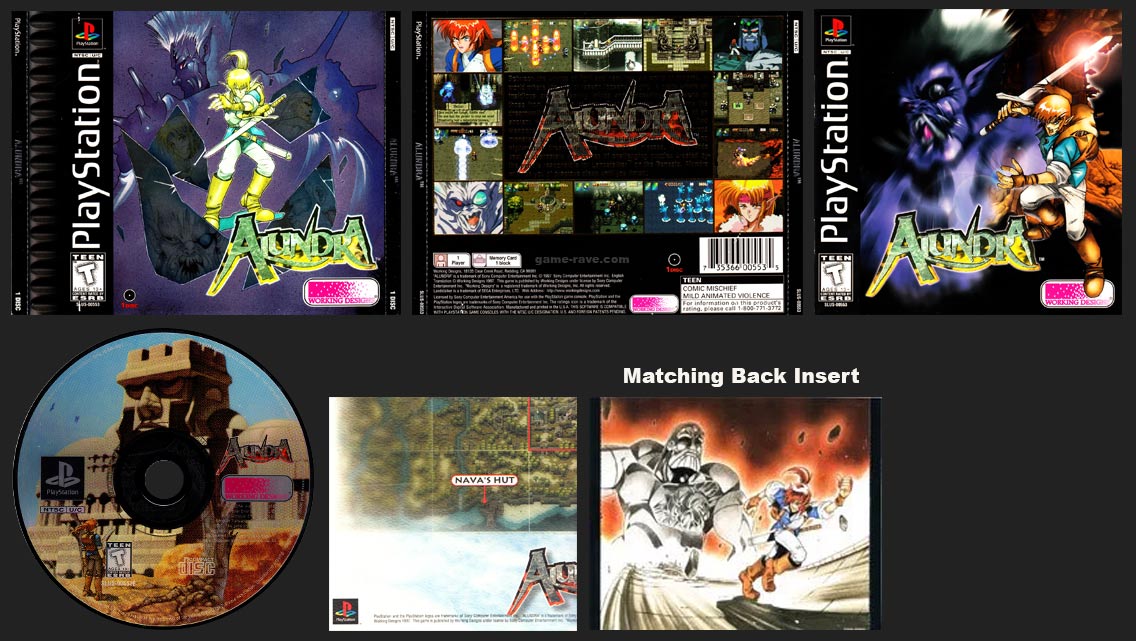 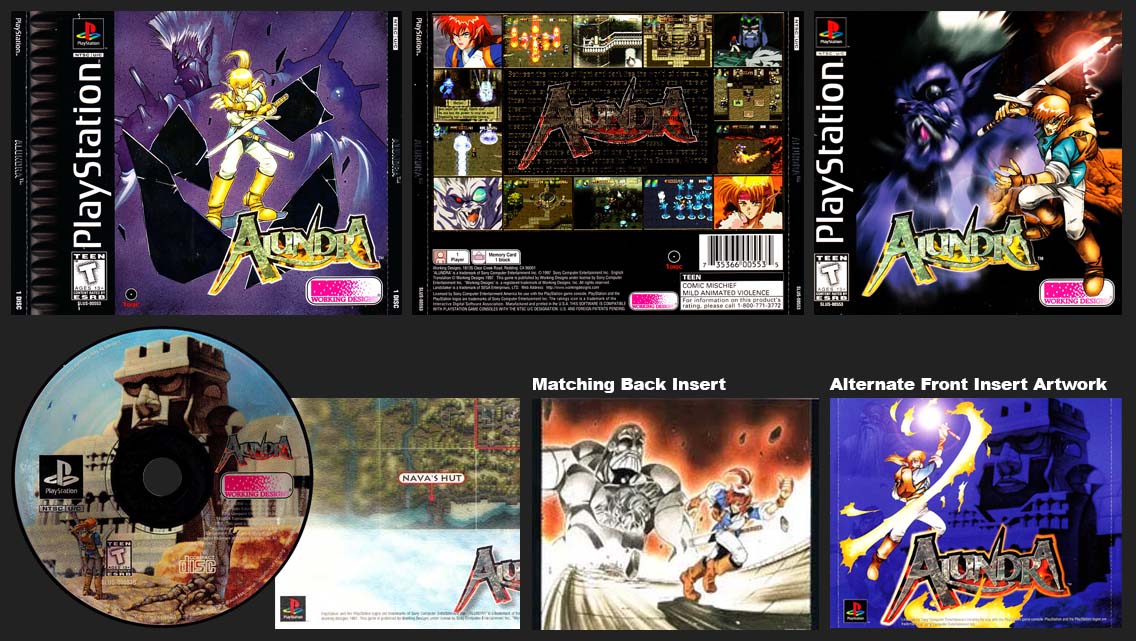 Variant B – Alternate Inside Insert Art 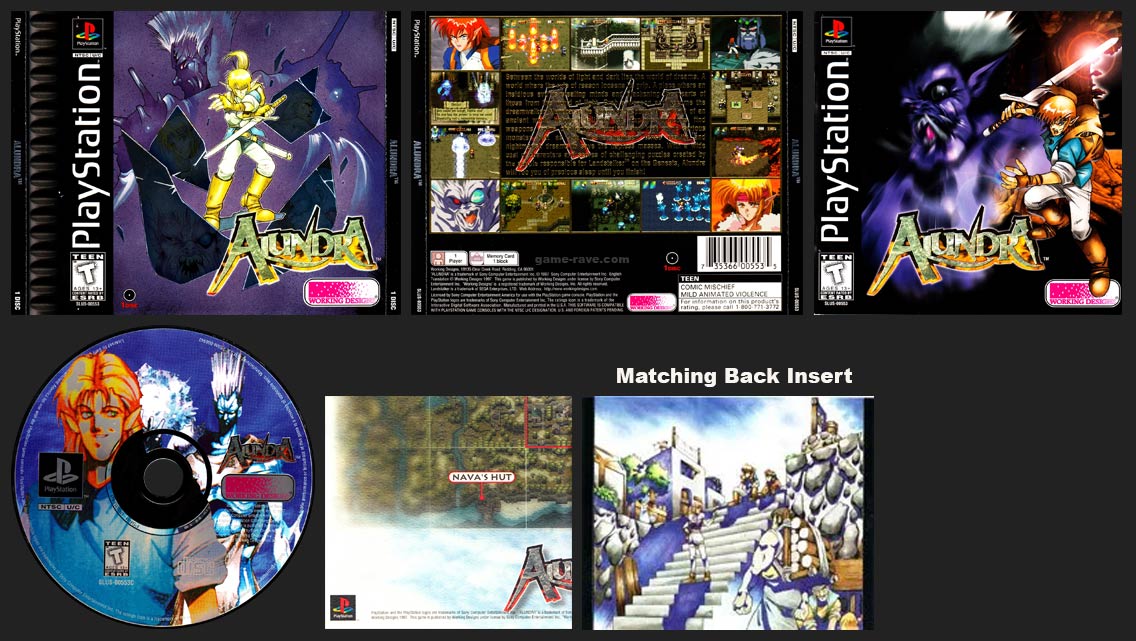 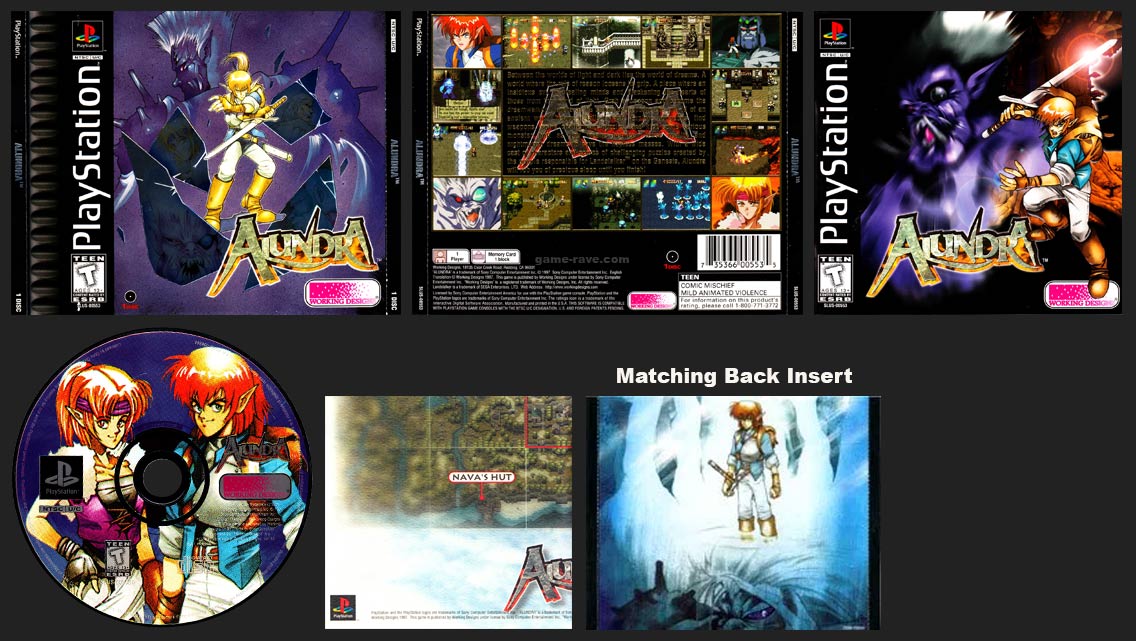 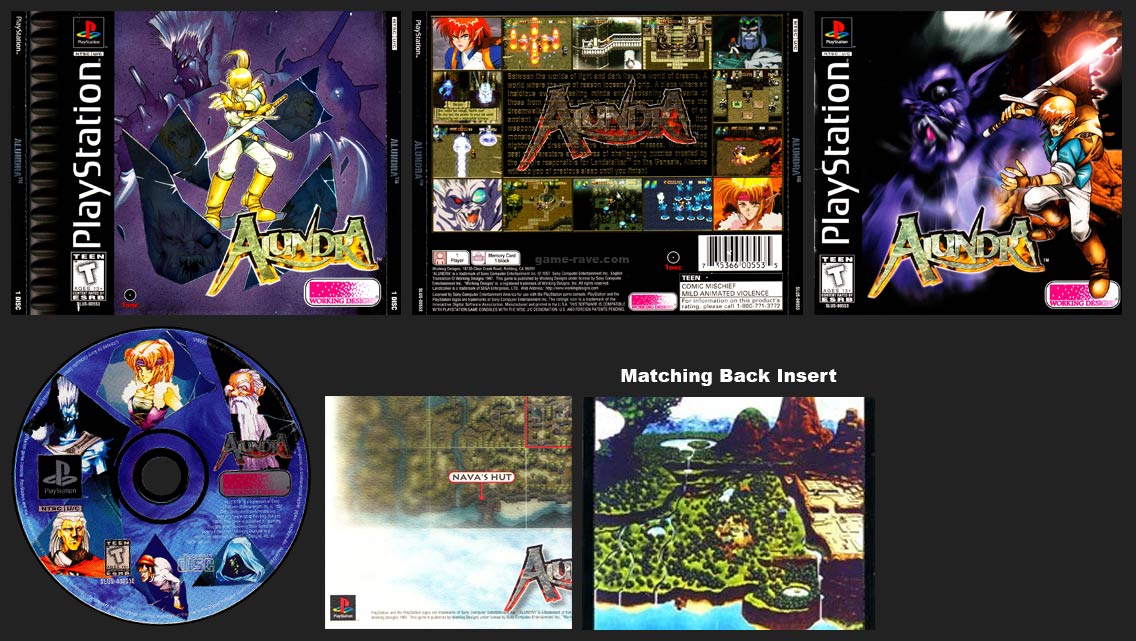 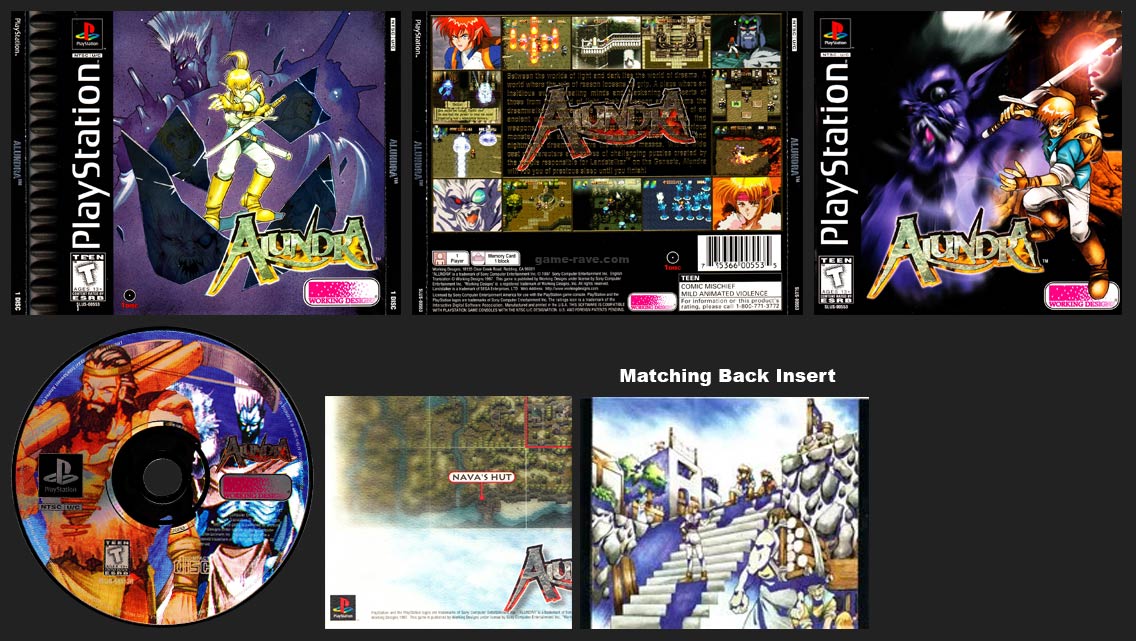 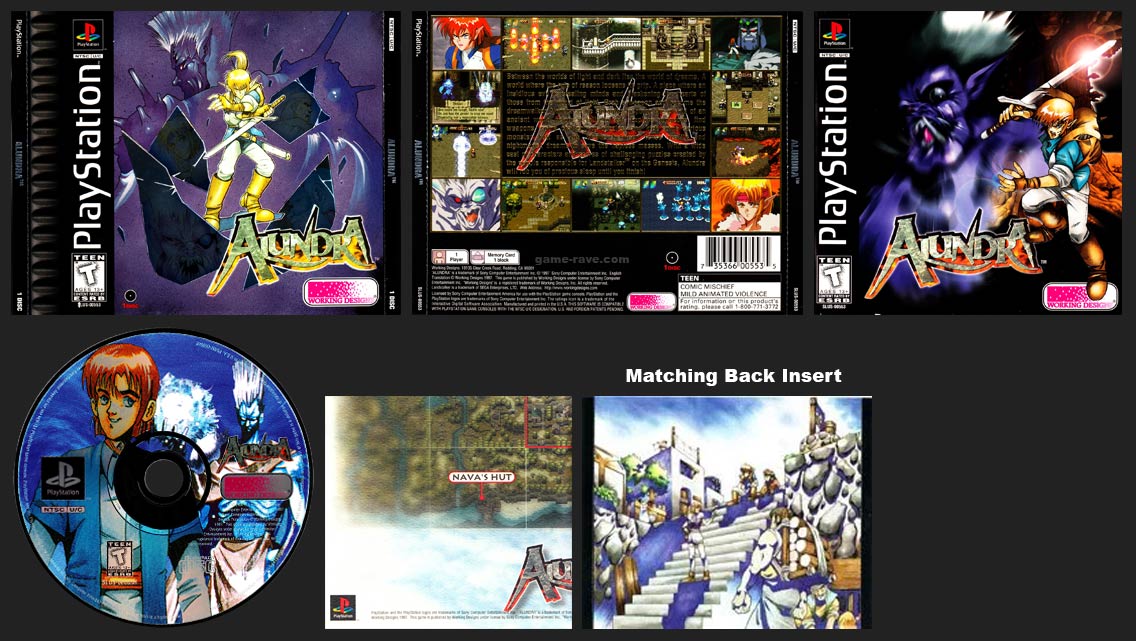 What happens when you take the creative team responsible for the Genesis cult favorite LandStalker and serve them up 32-Bit style? You get one of the most frustratingly fun and truly hardcore Action/RPGs you will ever happily suffer through; Alundra.

Working Designs brought the game over in 1998, and did a fantastic job in keeping their gag humor in check. The game itself is set up exactly like the Nintendo classic The Legend of Zelda, except there’s a lot more jumping and mind melting puzzles involved. In fact, these are some of the most difficult dungeons ever created for the system. False turns, hidden passages, unbelievably blind leaps of faith, all mixed together in a world with little depth perception. That visual error aside, it’s a damn beautiful game with great 2D animation and fun Full Motion Video sequences. The world map alone is worth the price of admission, as you could spend hours trying to track down every last treasure chest and golden falcon.

The game’s battle system is in real time, open environments. There are no menus sans the one you use for items and a weapon change. Most combat is performed flawlessly, but there will be issues with some of the bosses. As usual, Working Designs changed the health levels of several key boss fights, causing these encounters to last a LOT longer than should be legally allowed.

More importantly, and this is where most will turn away; Alundra is one of, if not the most cryptic role playing created when it comes to providing clues to your next move.

Just make sure you have a few extra controllers. You will break a few of them in frustration.

Alundra included a pretty snazzy map created using screenshots with character information on the back. It was printed on thicker, almost greeting card paper stock to make it more rigid and durable than your typical included poster. 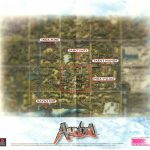 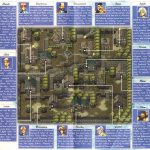 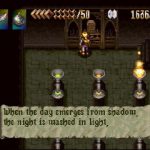 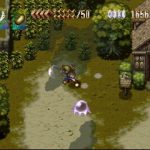 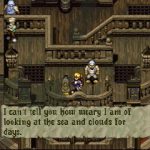