The original release of the game on both Saturn and PlayStation included a Pre-Paid Phone Card. There is no known ‘plain’ version of the game.

Never has a game’s own title so aptly described what the gamer will face. From the moment you begin One Eyed Jack’s Revenge, you are truly left alone in the dark. I don’t mean an absence of light either; there’s plenty of that. I’m referring to the absolutely abysmal user interface and unholy excuse for a game engine that you have ever seen.

The game is a sequel to the original Alone in the Dark, which first appeared on PCs back in 1992. That release was more puzzle based, where OEJR is more on the action side of things. Problems from this switch in mechanics reveals itself fairly quickly, as your protagonist is shot-up like Swiss cheese with every corner he turns.

Your character, Edward Carnby, is a private eye sent to investigate a case left behind by his now dead partner Ted Stryker. In the game’s opening cinematic, you witness what happens to Stryker, and once the game begins, pick up two weeks later. Your mission is to infiltrate the mansion known as Hell’s Kitchen and find both Stryker and the kidnapped girl he was trying to find, Grace Saunders. 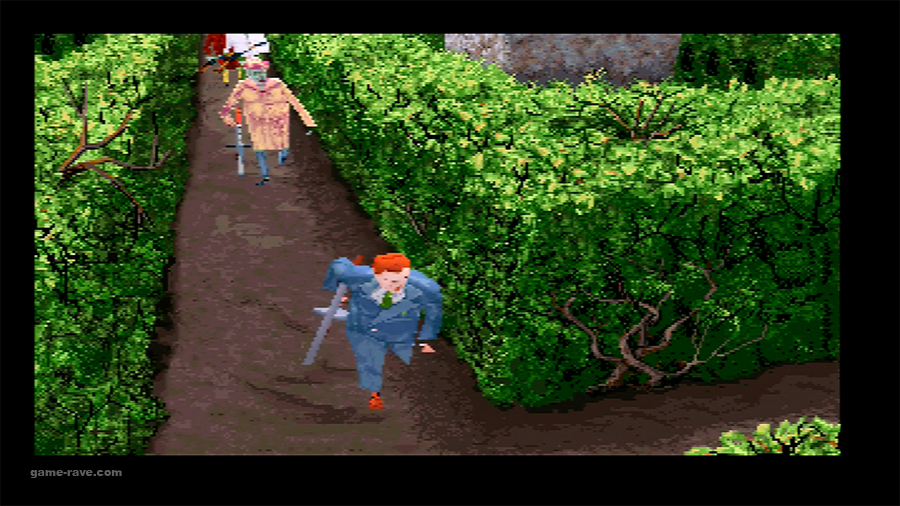 One of the major problems this game has, especially when taking the cover art into effect, is that it has no idea if it wants to be serious or hokey. The introduction plays out like Splinter Cell meets The Addams Family, with goofy green zombies dressed in mafia suit coats. Then a cinema plays out where Carnby uses explosives to blow open the mansion’s front gate. You then begin the game with…6 bullets and a firearm.

If you have the brains to bring explosives to act as a key, wouldn’t you be smart enough to bring….more firepower? You also can’t blow open the front door because well, you only brought enough for the front gate.

Once you get into it, you begin to realize where future games like Resident Evil got their roots from. You wander around outside the mansion until you find yourself in an absolutely impossible and implausible fall that lands you underneath the property. You work your way up from the hidden cavern, and then start playing solve-the-puzzle with the various rooms. It is here among the gameplay that the game truly and absolutely falls apart with no hopes of redemption. 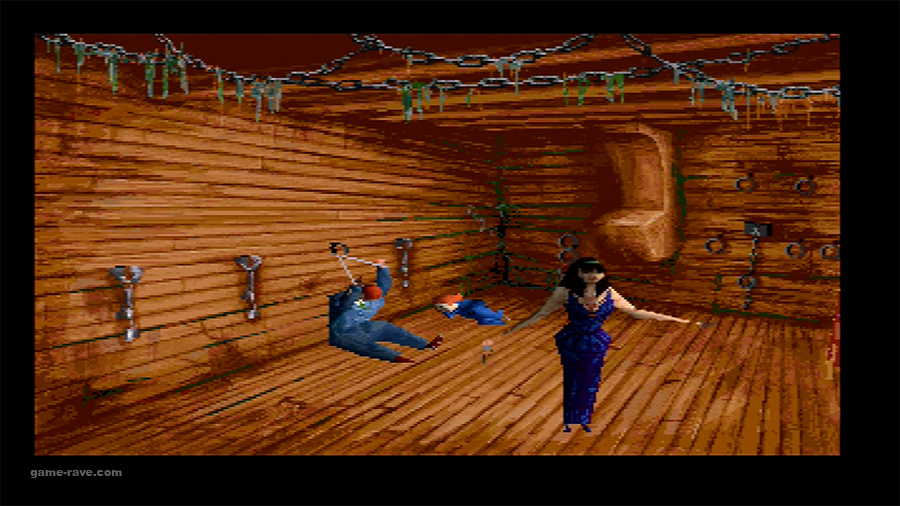 First and foremost are the ‘puzzles’. They’re problematic for two reasons; the first being that many aren’t really puzzles, they’re just obvious hints presented in dumb fashion. The other half are just inconsistent with how you would interact with them. By example – in Resident Evil, anything you could interact with was actual game graphic or polygons. If it was part of the background CG, you could at least click on it for a clue, or a throw away comment. Here in Alone, polygon items could be nothing at all, and CG elements that offer no clue or hint are parts of a puzzle. This leads to a lot of frustrating back-tracking, blind selecting items to see if they work, and overall frustration.

This would be more tolerable if the actual game engine were better programmed. Rather than optimize for the newer, more action oriented combat, the game tries to shoehorn the gun-fighting into the present architecture. This results in comically bad situations where the enemies fire just fast enough to prevent you from raising your weapon or worse – not even get the chance to advance to the very screen the enemies are at. Too often the flat CG backgrounds will change camera angles for no reason, providing you a completely opposite view of from where you were walking. This leads to temporary confusion, as you find yourself spinning around to correct your path.

While the game is understandably old, it clearly hasn’t aged well in the polygon graphics. Enemies are a jumbled mess of green and grey, body proportions are all out of whack, and the only two females in the game, Elizabeth and the child Grace are two of the most terrifying character models to ever grace a game, and not intentionally. 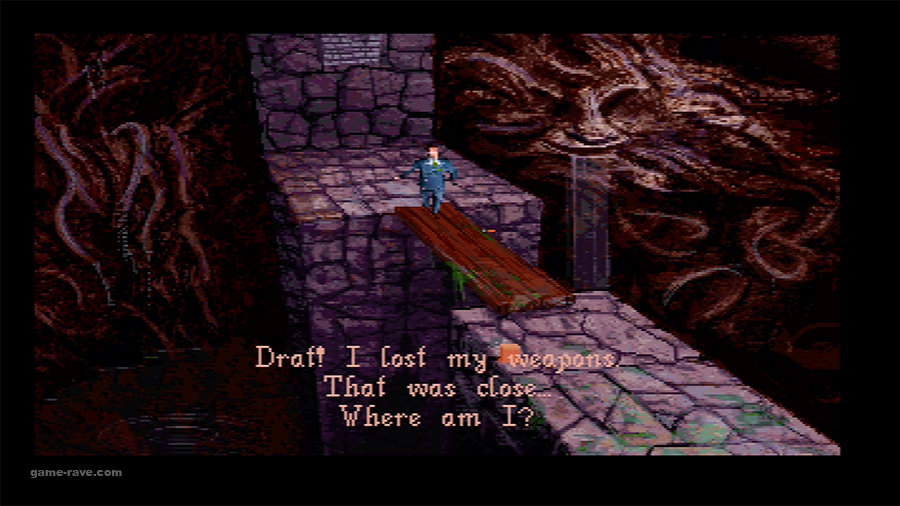 Grace is also a huge thorn in the game’s side; as mentioned earlier it really doesn’t know if it wants to be cheeky or scary. Midway through the game you suddenly gain control of Grace, and you’re able to do things with her that no child her age could. Two parts Home Alone antics and one part suspension-of-disbelief are required to play her segments, especially when it comes to how she combats the zombie pirates. It’s actually here in her final play segments where the game completely falls apart, thanks to not only a game over-sight but a horrific decision in file saving.

You see, there’s no over-writing a Save File: You have to actually delete a save file, and then save. Thanks to the game requiring 4 Blocks, you’re only allowed 3 saves. The amount of load times that are part of this file management wear you down fairly quickly and you just want it to be over with. While in the process of trying to solve a problem during Grace’s area, I used an “Ice Bucket” item that had no description of what it was for. Grace simply stooped down and spilled it, creating an ice puddle. Realizing it was probably a trap or something, I reloaded the save, and used it on a zombie that had been preventing me from acquiring a needed item. Having deleted the previous save to make room for the new one, I went on my way. Long story short, it turns out you needed to have *two* zombies slip on the ice patch. Well…the patch was used on an upstairs zombie, and the one I need to wipe out was downstairs. Except, they can’t climb or descend stairs…and there was no way to pick up the ice I dropped. I also couldn’t reload the previous save because I had deleted it to make room for the new one. The other two saves were all with the spent ice bucket.

I had quite literally trapped myself in the game. No amount of outrunning or hi-jinx would get me past the zombie in the room. So Grace is forever stuck there, standing outside that doorway, just wanting to ring a bell to summon a dumbwaiter… 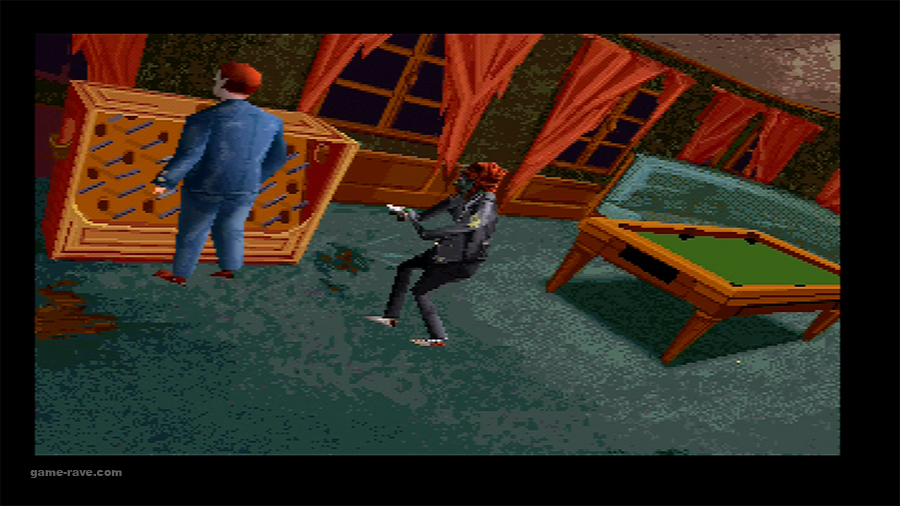 There are some small tiny positive spots in the game, like how they use lore and diary entries to help you sort out boss fights, but they just can not stack up to the train wreck of everything else. There are horrible, repetitive music tracks, poorly sampled vocal sound bites, an inconsistent presentation, and a revenge tale that essentially boils down to an idiot pirate being trapped in a cave. He decides to set-up shop in a mansion and be a gangster.

In the end, I could just start from scratch, and just completely use the guidebook to retrace 90% of the game, but there is so much else to play, and do, and not do, and anything else than suffer this game again.

Until I have to review the Saturn version.

The second time being alone in the dark is not the best time to be a gamer. 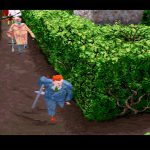 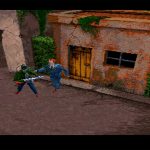 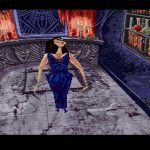 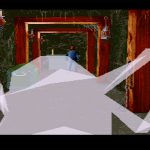 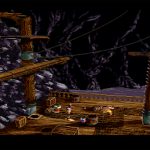 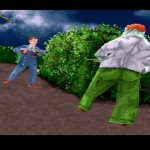 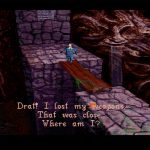 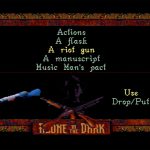 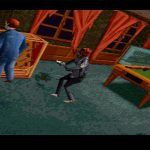 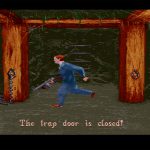 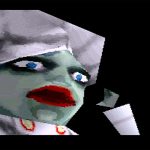 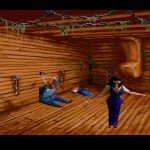 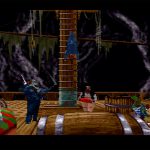