Silent Hill has some nifty variants, but the first is one of the most annoying in the entire PlayStation Library. The launch day Silent Hill was a  Pre-Order ‘Day 1’ edition that came with a special manual gimmick. It was essentially coated in a silver finish, often referred to as Foil, Shiny, or Silver. The problem comes in trying to tell the difference between the Day 1 and 2nd shipment versions. From a photo, through the jewel case and based on lighting, the two can look exactly the same.

To help Variant Hunters, I’ve mapped out the easiest way to tell the differences. Take a look at this picture and keep an eye on the following points. They’re listed in easiest-to-spot to the hardest. The Day 1 Edition is on the Left: 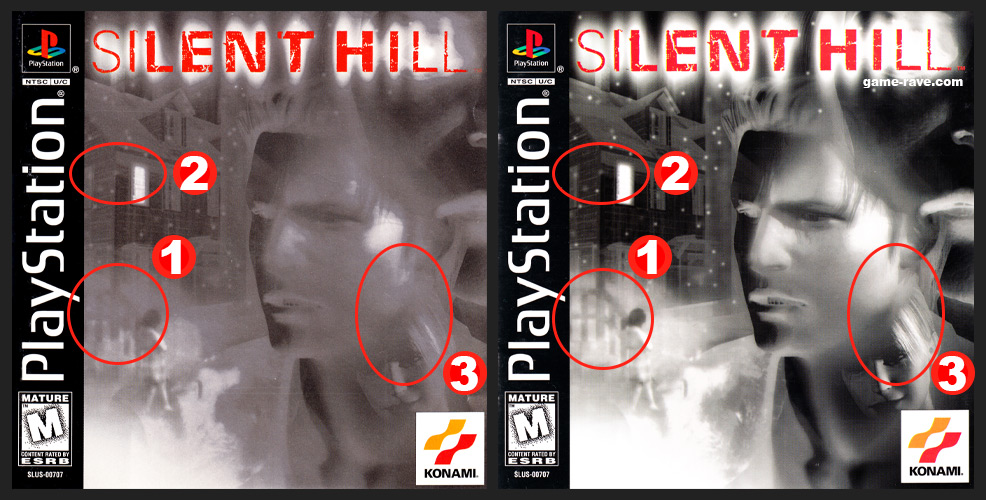 As discussed above, here’s the 2nd print run release.

Konami released Silent Hill as a Greatest Hits edition with no changes to the SLUS or PSRM. The manual, disc, and insert are all ‘plain’ SLUS and PSRM as the regular release.

Silent Hill, Metal Gear Solid, and Castlevania: Symphony of the Night got a special later reprint that was sold at Blockbuster Video (remember them?). These reprints have GHA at the end of the SLUS designation. So it’s SLUS-00707GHA / PSRM-011542. The manual, disc, and insert all have the GHA so it’s an easy match.

Silent Hill made it into GameRaveTV’s Best Games of 1999 episode.

It also made it into the Cool Things Developers Did With Accessories.