Due to an unfavorable reception of a “Mexican Bandito” toy character in the game, Disney re-released the Greatest Hits version with the character in question now replaced with an American blond cowboy.

It was last released with two other games in the Disney /Pixar’s Collector’s Edition box set.

1999 was an incredible year for the PlayStation thanks some amazing game releases while the hardware proved it could still hang with the newly released Dreamcast while fending off the Nintendo 64 and smothering the Sega Saturn.

To give you an idea of the year’s releases, among them are Einhander, Silent Hill, Syphon Filter, Ehrgeiz, Street Fighter Alpha 3, and more. Hiding among those Top Sellers were smaller releases and licensed video games. You know licensed video games – usually based on a cartoon, movie, or toy line where no one really cares about the development and it’s shoveled out to market?  Well, developer Traveller’s Tales was not having any of that non-sense, and in November of 1999 they released one of the best licensed games to market, Toy Story 2: Buzz Lightyear to the Rescue. 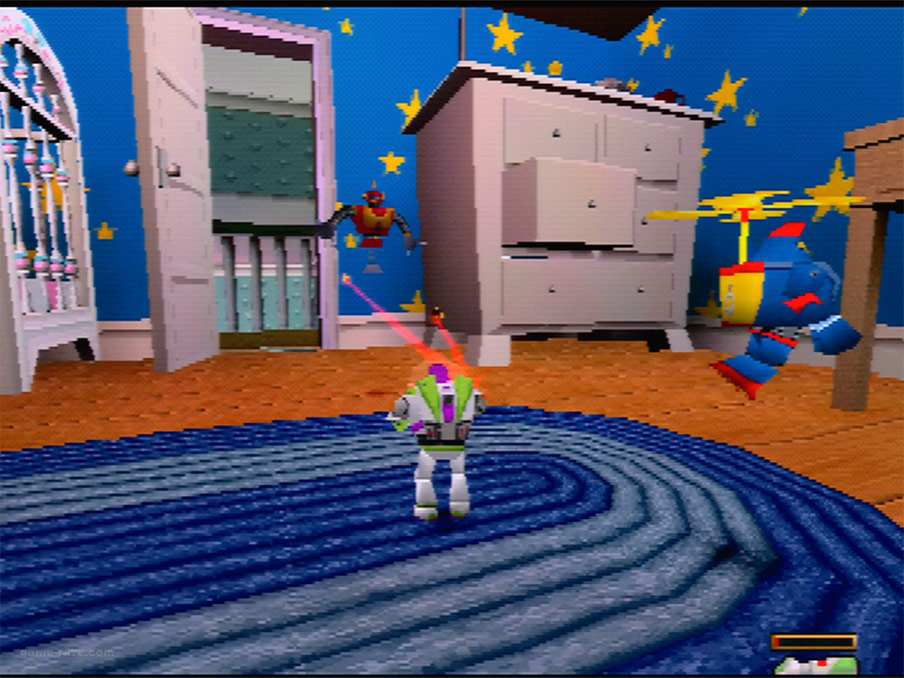 Based around the events of the second movie, you take on the roll of Buzz Lightyear (obviously) and must traverse Andy’s room, neighborhood and city to snag Woody back from the clutches of the evil toy collector Al.  The game’s levels are a sight to behold on the PlayStation, as they not only have an excellent graphical appeal, but they’re fairly large for all the events happening in each one.

Like Super Mario 64, each level has a set of quests, where Pizza Tokens replace Mario’s stars. Broken down into 5 separate missions per level, these usually consist of collecting 50 coins, finding a piece of Mr. Potato Head, finding 5 missing items, a random event, and then some sort of boss fight. Various characters from the Toy Story roster make cameo appearances for the collecting quests, while mostly game-specific invented characters round out your enemy list.

Buzz’s move set if fairly simple, but there’s no real need for more. A platform at heart, buzz has access to his laser beam in two different strengths, a spin move where you use his wings offensively in two different strengths, and then his jumping ability. As you collecting pieces to Mr. Potato Head, you’ll be granted access to supplemental power ups, like finding invincibility shields, a grappling hook for specific points, speed boots, and two others. Some of the quests are dependent on these extras, so if you want to complete the game 100%, you’ll need to go parts hunting.

As previously mentioned, the game is a graphical tour de force on the hardware. Huge connected room areas make up each section of the game, often with little touches that make the level that much better. For example, in Al’s penthouse, you can flood the bathroom with each of the water spouts to raise sponges into floating platforms. Other levels, like Al’s Toy Barn, are stocked to the walls with different toy box textures, an arcade area with animated machines, a giant mobile to climb, and so on. 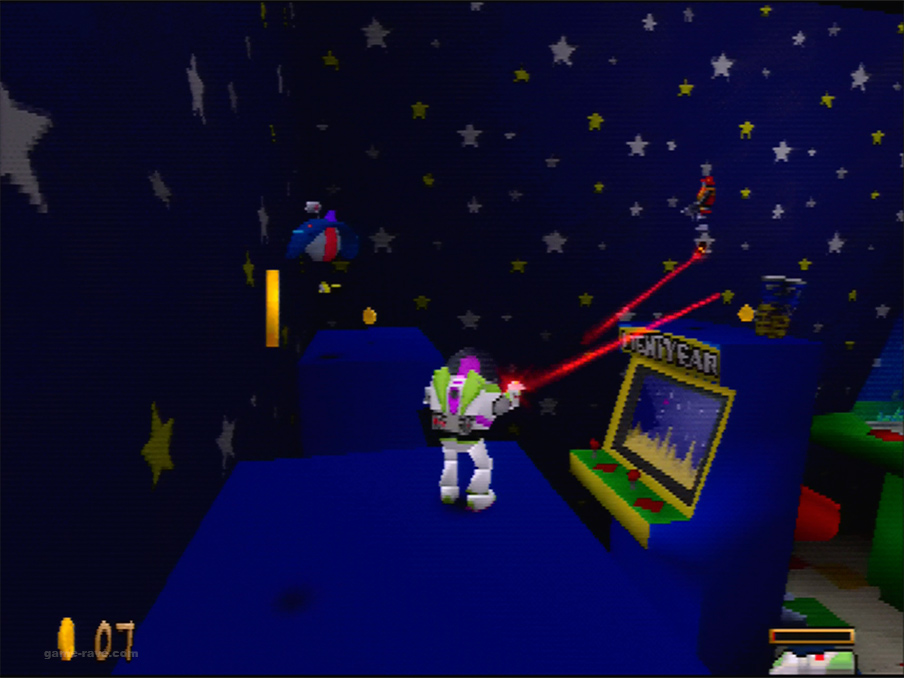 Every few stages you’ll have the chance to take on different boss characters, ranging from a flying airplane, a parody of the War of the Worlds aliens, Zerg himself, and others. The game’s final battle brings you face to face with the Collector and two of his henchmen, all while trying to keep your bearings as the cargo bay your stored on tilts. These are by far probably the easiest parts of the game, with good reason. Some of the game’s levels can be down right unfair in their difficulty spikes.

The biggest culprit in the spike are several areas where you must perform a long string of platform jumps, only to either be knocked off by an invincible cannon, or fall off because you missed the jump. You then have to completely repeat this process, no matter how many times said cannon hits you or you fall off. Some areas have hidden re-entry points that make the climb back up easier, but there’s still just enough aggravating repetition in some spots to leave you annoyed.

A shame, since so many of the game’s fantastic moments require some of the hardest jumps with the longest distances to fall and repeat the process. The later areas include an alleyway where you use the grappling hook to scale several stories to a thin gutter high above the alley. This gutter splits into two paths, one to a collectable duck, the other to the mini-boss. After what felt like 20 tries to get to the gutter, on my first jump to it I accidentally caught a wire and glided off to a long drop to the bottom. Later in the airport area, you’ll wander through-out the baggage claim area made famous in the movie. A different sort of challenge, you’ll realize that many of your collectables are way out of the way to find. 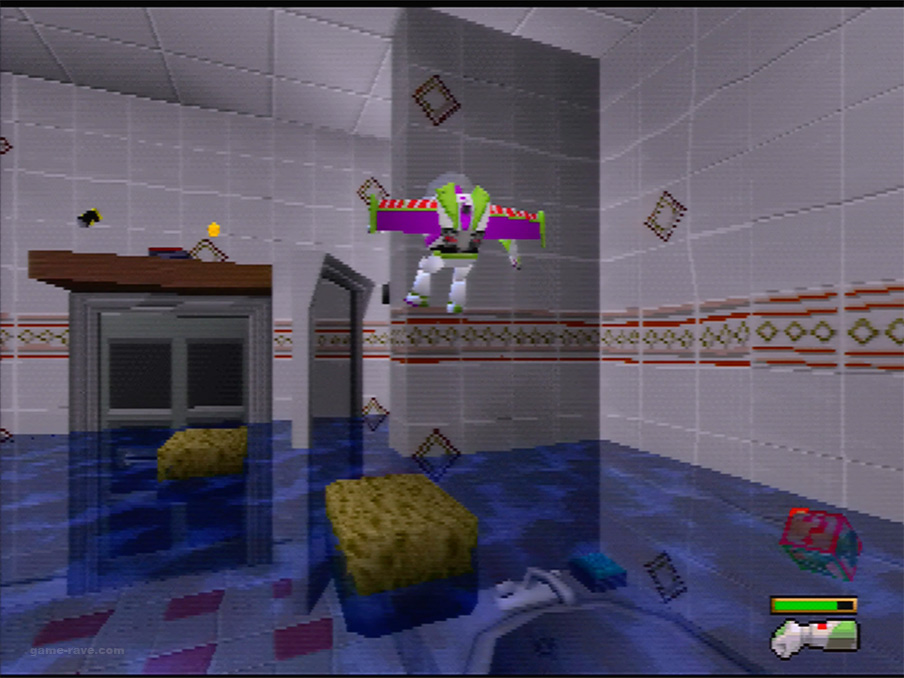 From there, the game only suffers two other shortcomings that prevent it from being a high 9 out of 10 on the review meter. First, while wonderfully orchestrated, the music tracks are criminally short, and repeat far quicker than they should. While not as bad as the 10 second loops in The Crow game, you will find yourself wincing once or twice at the infinite loop. Added to this is that your fellow toys will not shut up until you do their quests. You’ll constantly hear Hamm, Rex, and the others yelling, ‘Hey Buzz over here!” until you appease them.

The other is the camera angle. While no means bad, it has this weird delay to it and will not always properly stay behind you. In some of the more precarious jumping areas, you would have to jump, then wait for the camera to come back around so you didn’t accidentally blind jump into oblivion.

Those problems put into perspective with the rest of the game however, quietly fade into the background. It’s very rare for licensed games to come out at the top, and Toy Story 2 has enough of the good stuff to make one of the best pick-ups for the system. Highly recommended.

No snakes in these boots. Activision pulls off the license of the then lifetime and nails a fantastic adventure game in the process. 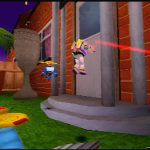 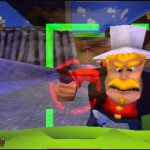 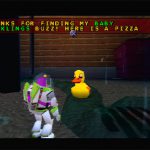 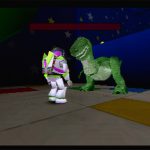 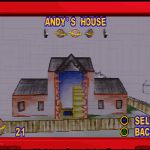 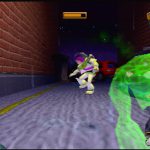 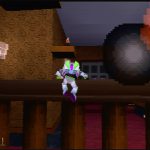 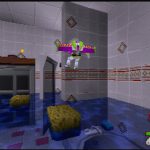 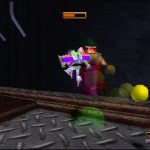 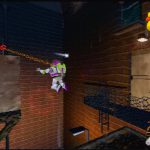 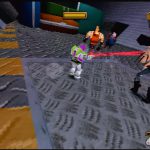 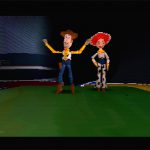 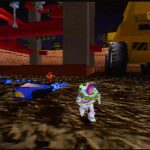 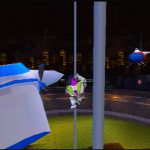 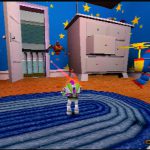 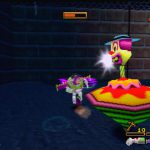 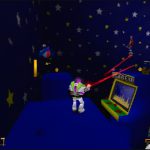 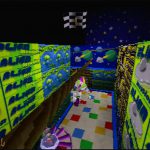