I’m not really sure who is in charge of children’s games, but for some reason no matter what game system you play, it seems like children’s games are always either the hardest or the most confusing. Blue’s Big Musical is no different; there are some cute games that children would dig but they’re stuck behind a confusing navigation set-up.

Players control Blue, though Steve is essentially the main character since he does all the talking and problem solving. The plot of the game revolves around the duo’s wish to build a stage and hold a musical performance for all their friends. In order for this to happen, you walk around Blue’s house and neighborhood talking and interacting with people and things. Eventually several mini-games will reveal themselves, and once played will reveal Blue’s Clues. You’re then asked to solve the clues, and this provides the next step in getting closer to the musical performance.

The game’s true shining point are the mini-games, which really are simple and easily played by young ones. This includes note collecting, musical chairs, item finding and more. Where the game truly stumbles is the layout. Because its in 2D, they achieve location movement by having you press a (usually) marked direction towards the background, foreground, or off to a side. In doing so, they have created a logistical nightmare since the perspective changes based on which side of the house you are one.

After playing for 2 hours (Shush! I’m doing a review) I got frustrated that I could not find 2 of the characters, and after pressing in every direction on every screen, finally found them off to the side where it didn’t look like I could press. The layout is confusing enough that the developers even included a full map of the game in the manual, which sort of defeats the purpose of exploration if you need a map to get around a house.

In playing a game, there should be never be frustration based on poor design. That possibility should come from being stumped by an in-game puzzle or mystery. When a grown-man gets confused about how to get around in the game, there is a fundamental problem with the aspect of it being a ‘Early Childhood’ game.

If you can get around that one hang up, and play with your child, there’s worse ways to spend the day. Just try not to be blue about it.

A cute game with cute moments that finds itself trapped in a horribly designed layout. 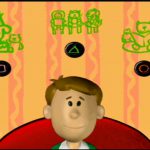 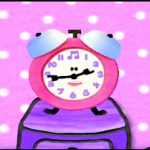 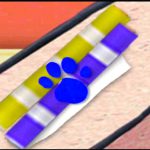 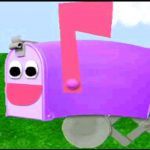 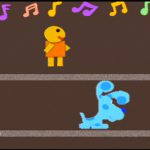 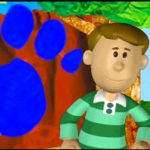 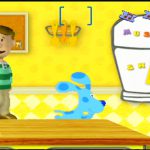 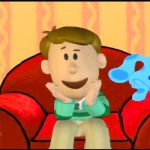 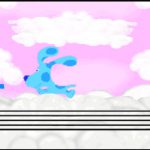 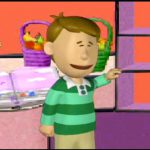 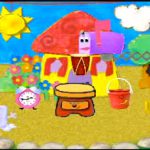 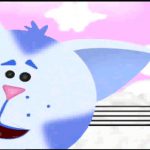