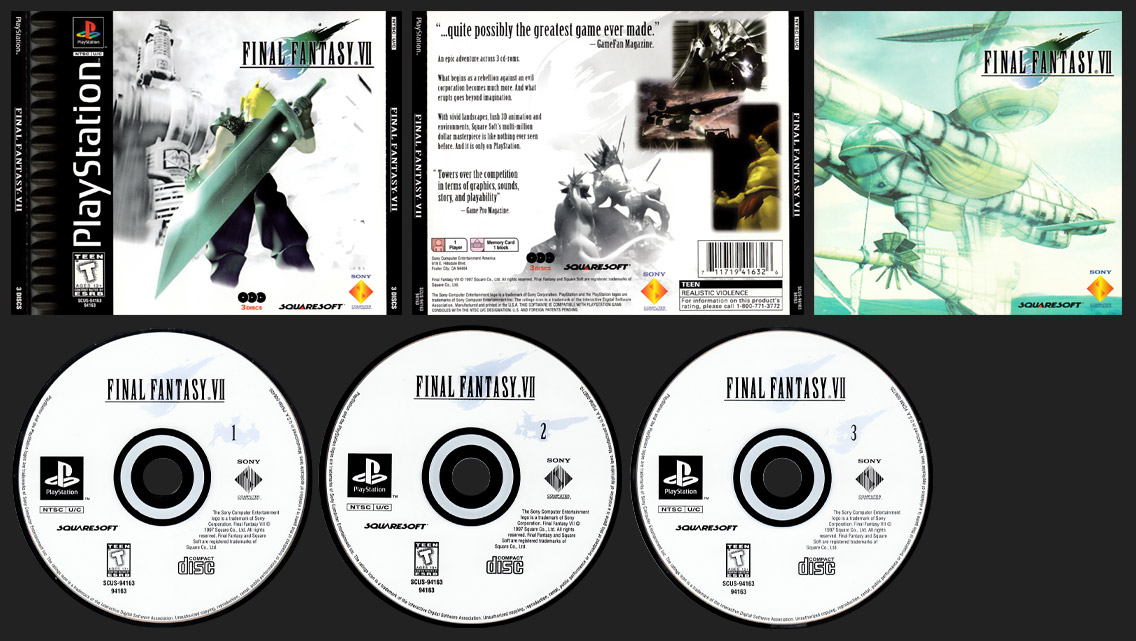 The release up top features an ESRB descriptor of Realistic Violence – yep. Just ignore the Call Spells and the talking cat and we’re cool. Squaresoft thankfully got the ESRB to take a second look at the game, and it was updated in the sequential print runs.

So Sony and Squaresoft have the ESRB take a fresh look and instead of the previous descriptor, we get “Comic Mischief, Mild Animated Violence, and Mild Language.” Cool! We’re all…’squared away’ if you will…except…what the hell happened to the ‘i’ in ‘masterpiece’?!

Yep. As a graphic designer having had the privilege of staring at this stupid wayward letter for two decades, I have tried to figure out how this happened. Letters are not individually controlled when typed into computer art programs. It’s still one full word to manipulate, and knowing its correct in the Realistic Violence version…this is just insanity. I just can’t. 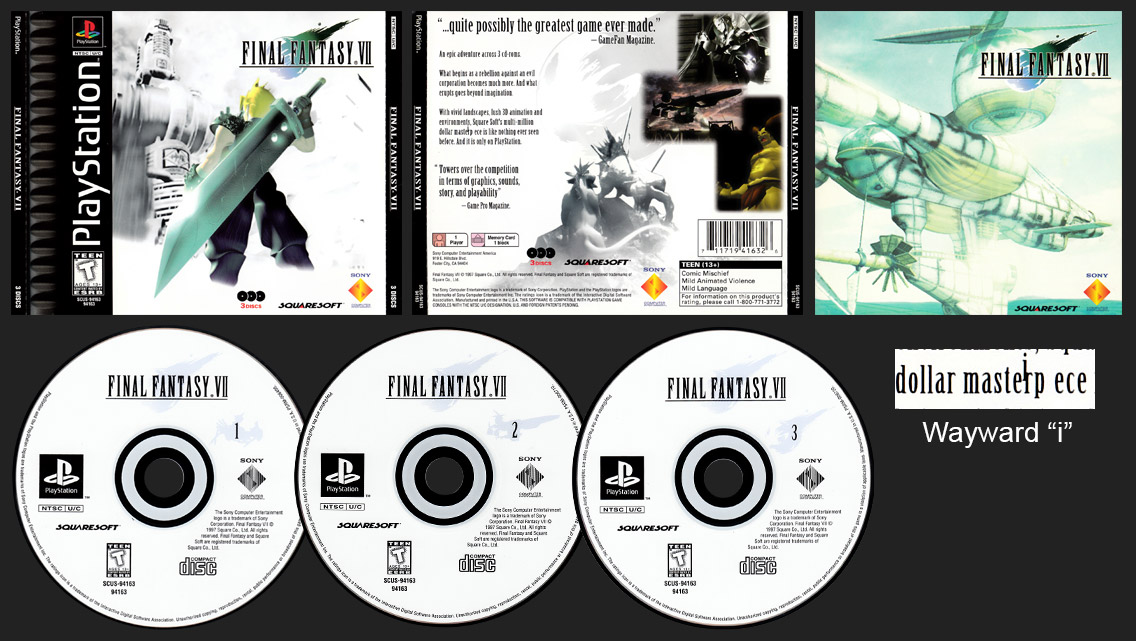 While all this is going on, the game is clearly selling like hotcakes. Sony is printing hundreds of thousands of copies of this bad boy…so of course there’s going to be a variant-within-the-variant. At some point in the disc manufacturing process Sony’s facility changed the silk-screening process – causing Disc 3 to have a 2-Ring hub while the first two discs have a single-ring hub.

This isn’t two different copies bashed together – this was verified by multiple eBay auctions, and it appears to only be the 3rd disc. 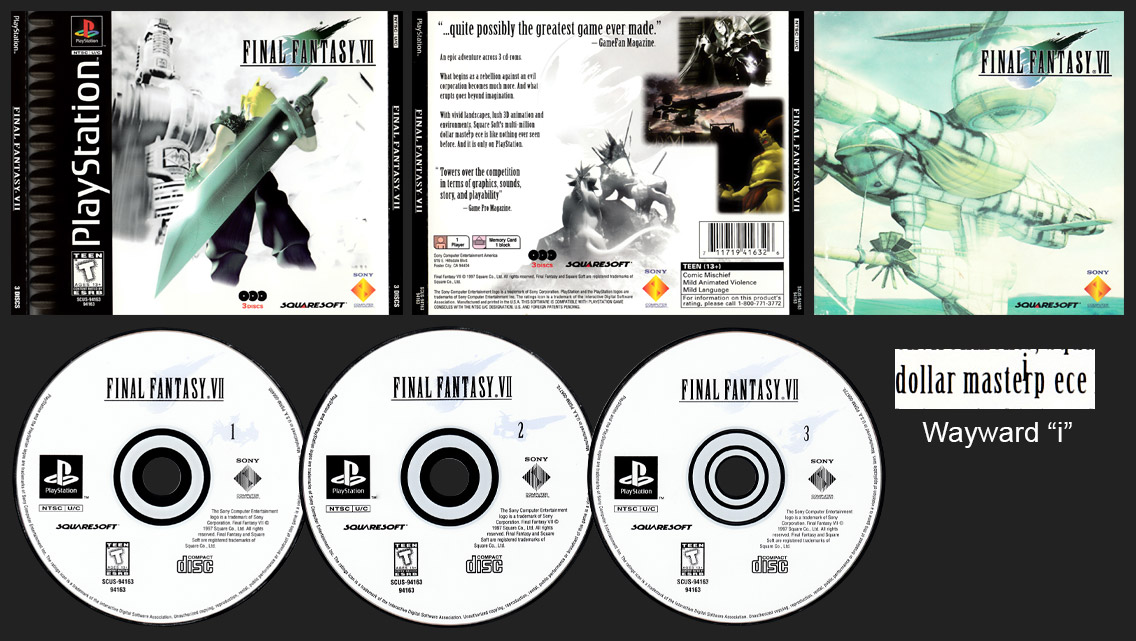 Thanks to viewer Nathan H., this third disc 2-ring hub has also been spotted in the Realistic Violence / non-floating “i” version as well, multiple times over. It’s unclear if that means it was in both versions, or something more nefarious is going on with my copy. More research will be done. However, it looks like we have at least one more to snag.

In full disclosure, I don’t know if this is the “4th” released in order, or the “2nd” released. The Masterpiece goof is gone, and we have the three ESRB descriptors. It’s actually…fine. So it either came after the Realistic Violence print as a valid update, or its the correction of the masterpiece goof. 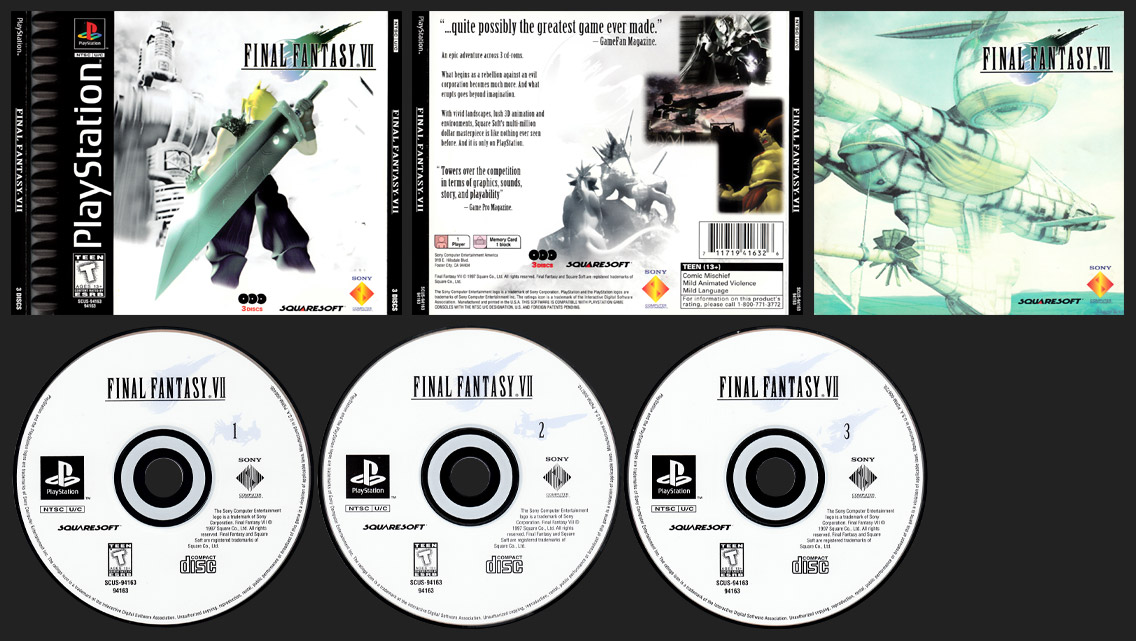 When it came time for the game to go full Greatest Hits, which it probably hit on Day 1, Sony must have had a lot of left over front inserts. The game’s first flirt with going green was only half way there. Everything but the front insert was the proper Greatest Hits coloring and design. This 50/50 variant was confirmed by two sealed copies on Ebay.

Also of note is the ERSB info. It’s still the same descriptors, but the font is off – its too big for it’s provided space within the rectangle shapes. This oddity would last through the Greatest Hits run.

Also, the Memory Card Icon now reads “1 Blocks”. BECAUSE WHY NOT?! 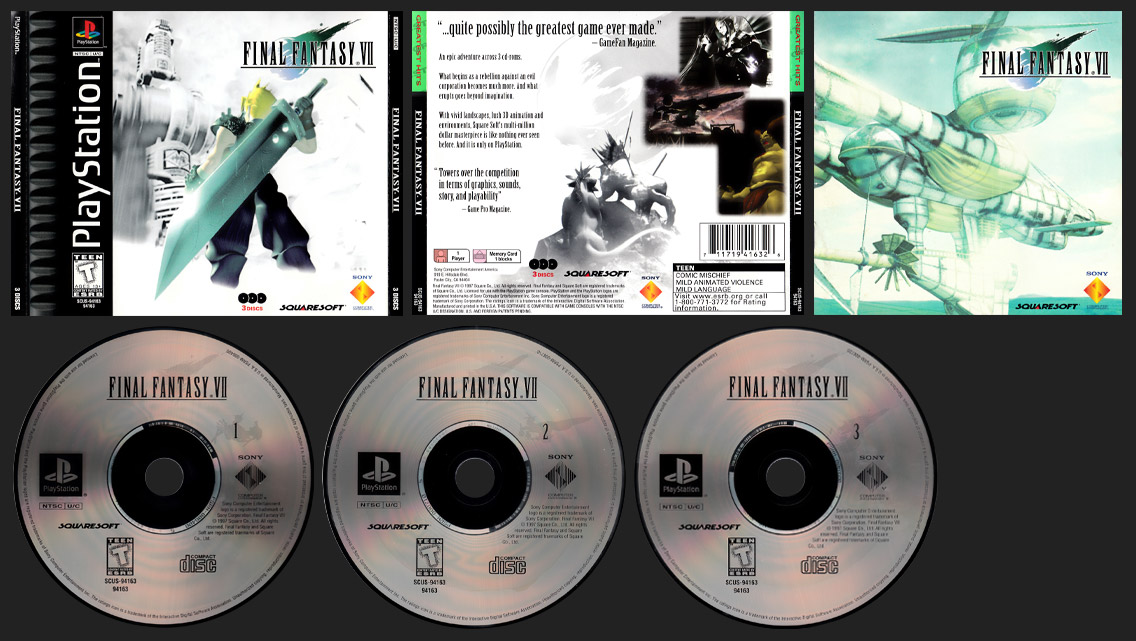 50/50 Variant – Front Insert is the Black Label release, rest of packaging and discs are Greatest Hits.

Next up we have the version of Final Fantasy VII only a Jenova could love – it’s double the Sephiroth, baby! That’s right, in updating the front artwork to finally be 100% Greatest Hits, the layout artist assigned the wrong inner artwork to the back of the panel. It should be the left half of the airship image with Aerith.

Which means….Sephiroth removed Aerith from the game case…it’s like a spoiler!

Still no fix for the Memory Card Icon. 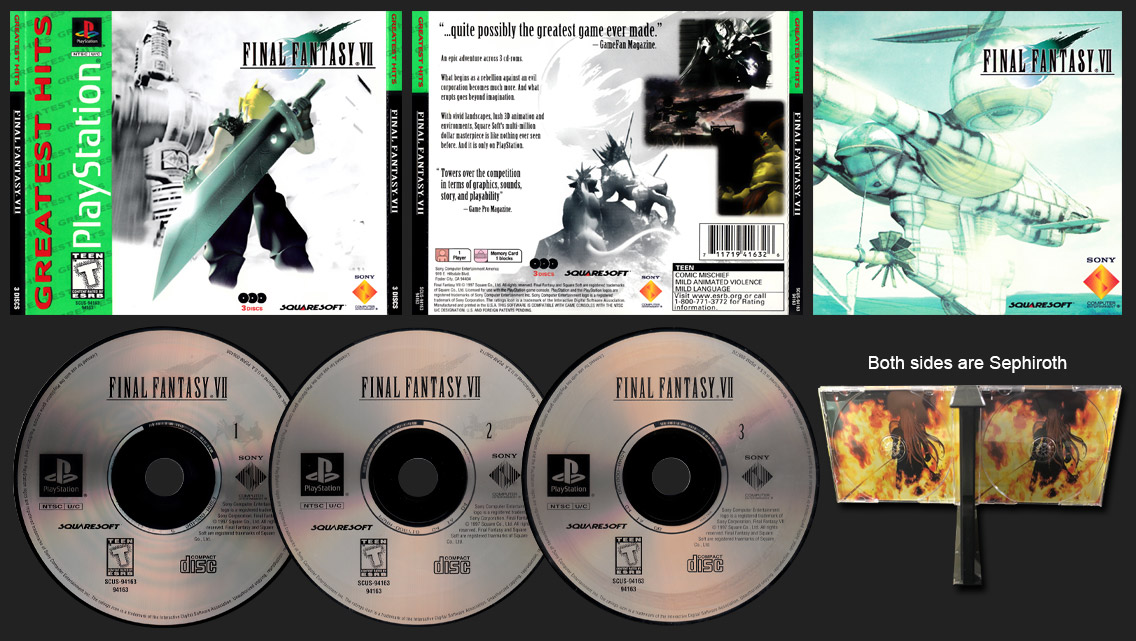 Finally…blessedly…I hope, is the last variant for the game. The Greatest Hits printing that once again returns everything to normal aside from not fixing the ESRB font issue. Still “1 Blocks” on the Memory Card, though. 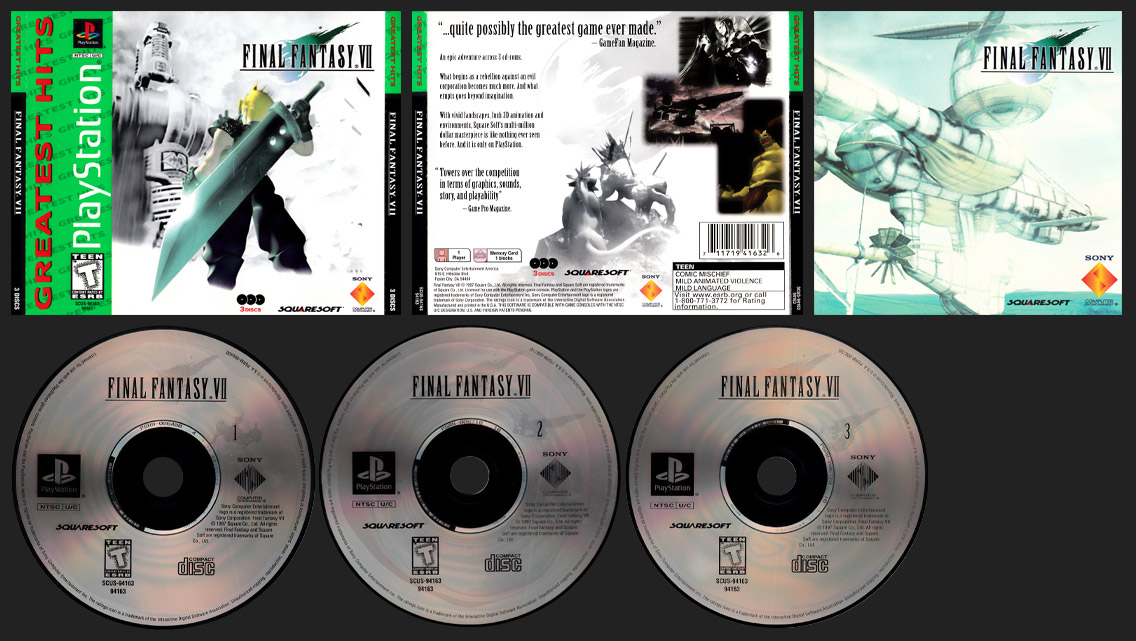 But wait, there’s more! Head over to friend of the site I.Am.Error who tracks factory production misprints across all systems. Among the tracked issues include:

Final Fantasy VII made GameRaveTV’s Top 10 Games of 1997…but where in the list did it make it?