It’s the year 2055 and the corporate world has taken a turn for the automatic. Throughout the world companies are replacing human employees with robotic ones. Entertainment and information industries are ripe for the taking and manipulation. A series of engineers and programmers don’t like where society is heading and decide to form a terrorist group known as Metalica – that’s Metalica with one ‘L’. 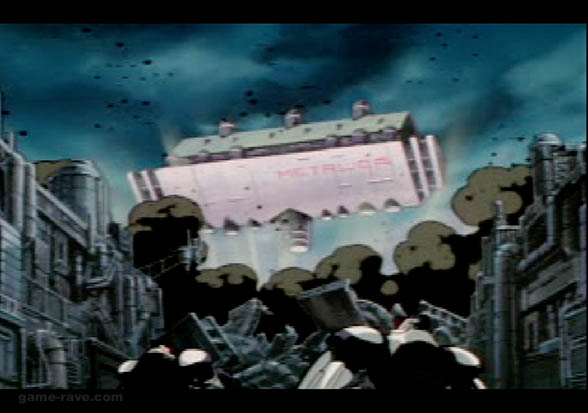 According to sources, the terrorist group is planning something big soon. With that information in the hands of investigators, the Horned Owl unit is called into action. At least, that’s what the manual wants you to believe.

Project: Horned Owl originally made our Milestones List for being the first ever Light Gun Game for the PlayStation, though its release would be a tad different between the NTSC regions. In Japan, the game was offered in a bundle kit with the sexy dark blue Hyper Blaster – Konami’s new accessory for the deck. Both were also released individually for folks who preferred the controller or mouse. The separate gun also allowed for an easy Player 2 hook-up.

In America however, the two were never combined into a single unit. Instead, the game was offered by itself and Konami would end up releasing the now bright green and newly named Justifier to go along with it.

Once in the game players will take control of either Hiro or Nash as they control their giant Police mechs – meaning the player is essentially the mech unit, not the person inside. Various mission details will be called in by Kate L., the operator for Hiro and Nash. According to the manual, Kate takes a liking to Nash, but this curiosity is never followed up on. 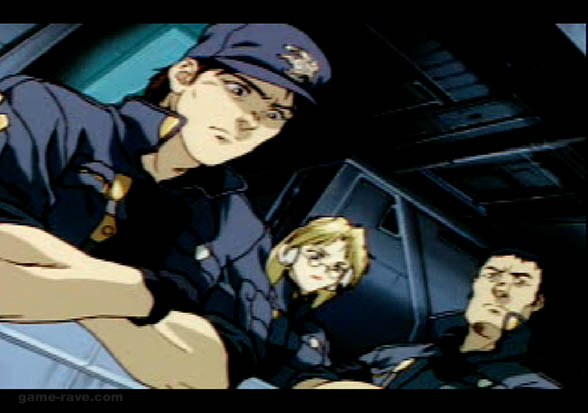 As the game opens up, Hiro and Nash are dropped into the streets of Metro City where the first wave of rogue enemy mech units have begun running amok. Here’s where the real game begins. Regardless of the controller input, players will have access to their gun’s standard bullet, a charged shot that fires a multiple of bullets in one hail, and then a limited supply of grenades.

If that sounds a bit limited, it is, but with a catch. Developer Alfa System treats their mechanical villains as if they were human – most can be downed in a single shot, regardless of difficulty. Once in motion, the game’s focus is more on precision targeting than it is a wild west shoot-out. Pacing is more methodical, with the game’s automatic scrolling moving players in a variety of directions and angles. It’s a strange middle-ground between the more stationary Lethal Enforcers and the hilariously more frantic pace of Time Crisis. It’s a fantastic entry point for beginners.

Enemy types come in four varieties; soldier, animal, airborne, and boss type. At any given time up to about 10 enemies can be on screen, leaving a wake of sprite-based corpses in your wake. Project Horned Owl’s environments are partially destructible, allowing players with itchy trigger fingers to blow-up cars, barrels, assembly lines, and even leave a few bullet holes in a giant fish tank. 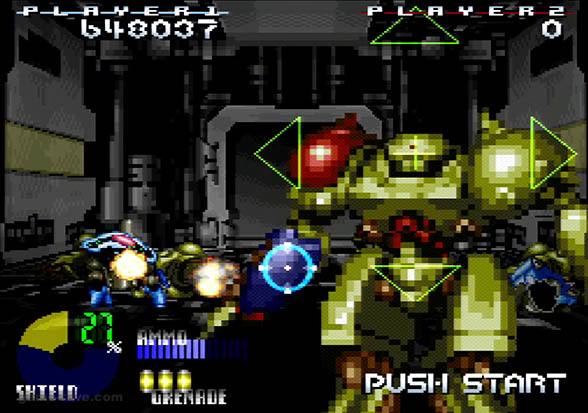 All of this action is presented in 3D environments with 2D sprite characters. The gimmick works thanks to animation frames including different angles based on the area players are fighting in. While simple compared to later releases, Alfa System finds this wonderful balance in the visuals.It’s very anime inspired, with characters and environments looking like they belong with each other. Speaking of anime, Ghost in the Shell’s Masamune Shirow designed the characters and mech units.

Players will have five areas to do battle in; the streets of Metro City, an Airport, An office complex, a manufacturing plant, and finally the headquarters of Blaire – the mastermind of the onslaught. Remember how I questioned the manual’s story set-up? Blaire is the main reason for the uncertainty. Inside the manual, it sounds like a bunch of programmers are to blame for the chaos. On the back of the case, players are told that Blaire is a dictator in charge of a robot army. Once in-game, his means and reasonings change once more. While I won’t spoil the real motive he’s carrying on with, this confusion only leads to more questions. 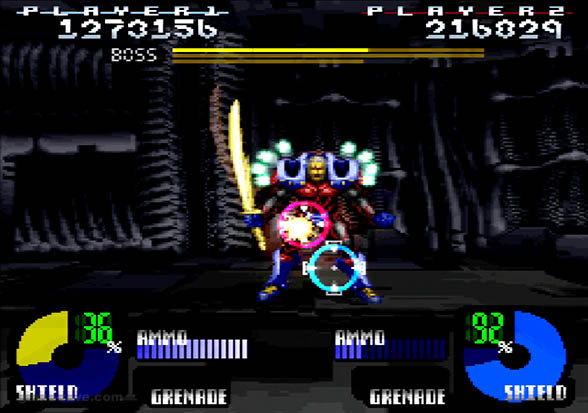 I’ve finished the game 4 times, once for each difficulty level, and despite having a nice set of actual anime footage, the story is never really expanded upon. Even Blaire’s initial and final reveal brings more questions than answers.It’s possible Alfa System had a broader plan in place if Project Horned Owl had sold like hotcakes – sadly it seems any of those questions will never be answered. Add to this unfulfilled storyline all the different interpretations of what was going on in the story, and it’s clear something was lost in the translation and creation.

That caveat out of the way, the game shines where it needs to. The Konami Justifier does admirably well with the bullet types, and firing the grenades is easy. Where things get really interesting are the mouse and controller options. When using the mouse, the Left Button defaults to main bullets and the right fires grenades. To reload, players simply flick the cursor to the edge of the screen, simulating shooting off-screen with the light gun. For pause, dragging the mouse to any corner and pressing the Left Button brings things to a halt.

The controller’s configuration is the most hilarious, as it shows Alfa knew how to stifle cheaters. When pressing Reload on the controller, the reticle will quickly dash to the edge of the screen and then return to where you last shot. This intentional mimicking of the off-screen reload prevents players from spamming reload and fire at the same time, creating an infinite wave of bullets. I genuinely laughed out loud when I realized the gimmick. 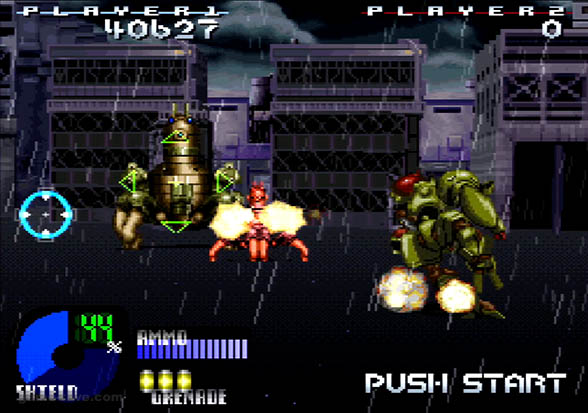 For players who like to unlock things, Project Horned Owl delivers everything in one shot…pun intended. All that needs doing is finishing the game on the Very Hard difficulty. This will reveal Level Select, extra audio files, several polygon models to view, and more. It won’t take long either, as the game can be finished in about an hour give or take.

As a final aside, the game’s scoring system is a bit…sadistic. After each stage the game will rank you on the number of enemies killed, remaining health, grenades used, and then combine that score with bonus points for a final tally. That tally is converted to a letter grade, so far anywhere from A to J, with J being the worst. I finished a stage with 98% kills, full health, and no grenades used….and my letter grade dropped.

Regardless, if players make it to the high-score table, Project Horned Owl allows them to draw their initials in. Using bullets from the light gun, or the mouse and controller, gamers can really leave their mark on the game. Just be sure to play on at least Normal, as Easy difficulty cuts you off after the second stage. 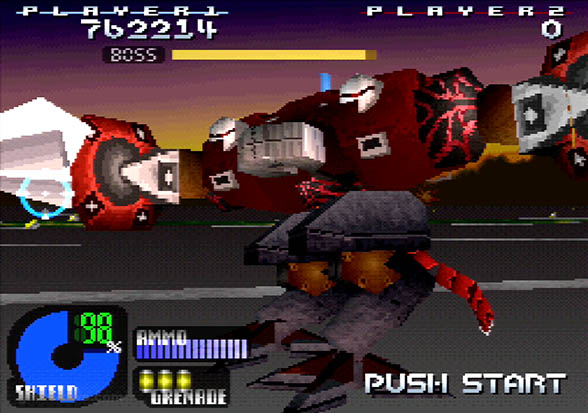 In closing, Project Horned Owl is a game that beat the odds. In its original time frame, it was chastised for being just another light gun game with nothing new to bring. 25 years later, it’s become more of a comfort food. Even though I have everything unlocked and have finished it four times, I can easily go back to it at a moment’s notice. The pacing is perfectly casual, there’s enough in-game downtime to give my trigger hand a breather, and it’s always fun seeing just how much better I can do against that damn rating system.

Project Horned Owl is a fun game with a long lost accessory that provides a fun ride and easy replay value. If you have a CRT television and access to the Light Gun or Mouse, have at it.