(Originally published on Game-Rave.com’s previous site. A re-review of the game will eventually be written.)

There are often surprises in the PlayStation library that for whatever reason I never tried the first time around. I’m pretty sure I was in my severely jaded / elitist gamer mindset during the late 90s, so it’s my own fault. Now that I’m older, arguably wiser, and more laid back in my retro-active gaming duties, I’m happy to say another (slightly tarnished) jewel has popped up in the PlayStation library.

In Auto Destruct (I love that pun, seriously) you play a newly widowed husband and father faced with an interesting prospect: take revenge via an armored and heavily armored car belonging to an underground group that has ties to the police forces around the world. Your target is a nihilistic cult called Lazarus, whose recent attack on a mall left your wife and child among the dead. Through your new employer The Temple, you will travel the world as you assist finding the various cult members and assuring they no longer function in the darkest sense.

Your quest for revenge will take you across the globe in several locales, with various missions ranging from offensive, defensive, and assistance. Here’s where the game’s main kink comes into play. Too many of the missions seem like distractions to the main cause – how can you attend to revenge when you’re too busy playing bodyguard for various characters, or constantly running cross-town trying to find weapons to fight the bad guys who are on the opposite side of wherever the weapons are?

That snippet aside, the rest of the game is amazingly well done, and holds up very well to this day. From a graphic standpoint, Auto Destruct is clean, has a pretty well laid out cityscape across its multiple locations, and never really suffers from slowdown and terrible texture warping. Truth be told, the game actually looks like a beta for Grand Theft Auto III on the PS2. While the amount of pedestrians and traffic is pretty thin, there are enough hidden areas, surprise ramps for jumps, and other little secrets that make the game fun to run around in. I played the game in both HDMI and through S-Video on the original PlayStation, and it looks great both ways. Voice-overs are well acted and clear, with a good variety in the sound and effects department.

Your miles will vary with the control – I’ve never been a fan of sliding cars, but there’s just enough kick in the brake button to snap the car around when you need it to, just avoid grass above all else. More often than not there’s a nice little pool of water you go diving into and lose the mission.

Your weapons cache provides various missiles, machine guns, mines, and other fun little toys to hurl at the bad guy vehicles. Vehicles, I might add, that include every type of car you can imagine along with tanks and helicopters. Tanks…that happily roam the streets without anyone noticing…maybe that’s connected with the lack of pedestrians in the city! The tanks all got them…

In the end, the only thing stopping Auto Destruct from being a 100% awesome game is a pet peeve that should have been fixed. The game has no mid level progress save function – if you die, that’s it, start from scratch on that level. Having had to suffer through the tutorial 7 times because I kept dying in the first stage made it that much harder to continue on. If you don’t mind repeating yourself often, Auto Destruct is a pretty fun time in the city. 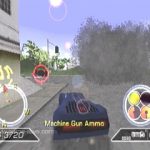 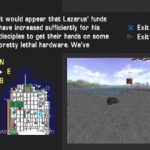 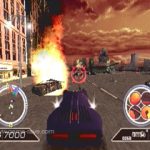 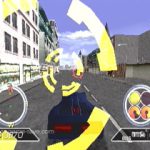 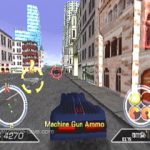 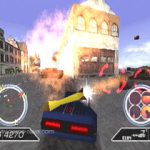 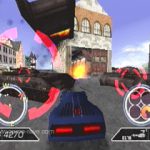 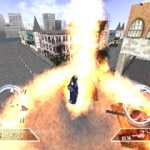 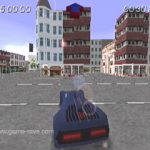 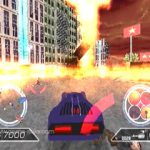 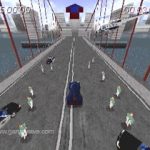 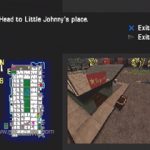 Auto Destruct has a ton of programmer cheats!