Toys R Us had a nifty bonus version where the game came with a mini-preview guide.

There was a jewel case release as well!

Finally released as a Greatest Hits.

What can be said about the Tekken series that hasn’t been stated before? It’s only the fighting game series that solidified the PlayStation’s stranglehold on the gaming crowd, was the first PSX game to sell over 1 Million copies, and holds some of the most memorable characters ever designed in fighting game history.

So yeah, it’s been places.

The original installment followed a somewhat clichéd storyline; Heihachi Mishima, talented martial artist and head of a huge corporation is holding the “King of Iron Fist Tournament.” To the victor go the spoils and riches. As the tournament begins, there are only 8 combatants left to claim the prize.

Based on a 4 Button layout, Namco opted for a neat twist on the button allocation. Rather than High and Low like Mortal Kombat, or the advancing strengths of Street Fighter’s, they opted to assign each button to a limb; one for right and left foot, as well as left and right hand. This allowed a more logical explanation to the thought process in developing and remembering combos, since moves were performed by the proper body part. Players could now ‘dial in’ combos by just remembering the animations. Those quick enough on the draw could then perform the devastating 10 to 11-Hit combo patterns that lay buried deep within each fighter’s arsenal. Although 3D in graphics, Tekken is a 2D game, while play fields will automatically scroll so that a player can not be trapped against a wall. Blocking is performed by pressing back on the controller.

Once you plow through the other 7 characters, you would face a sub-boss. This opponent was based entirely on who you picked, and would become playable once the game was beaten.

Considering this was basically arcade exact, especially now with the PlayStation 2’s Smooth and Fast Load functions, the game still holds up after all these years. Granted, there’s no tagging, no super-moves, no nothing – but then Tekken never needed that.

Tekken has aged like a fine wine. You don’t drink it that often, but when you do it’s always a fun time. 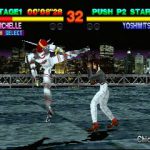 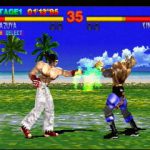 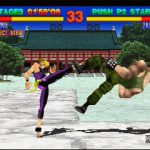