Everyone wants to have the latest and greatest in their gaming library, but what happens when you really don’t want to do it yourself? Interact Accessories tried to answer that question with the (breathes in) GameShark Football Midseason Update: 2000-2001 Season (Madden NFL 2001) Disc.

Here’s how it worked: For the then relatively cheap buy-in of $9.99, gamers could plop the disc into the PlayStation and do one of several things.

This was a Memory Card save for Madden NFL 2001 that contained updated team rosters. Player rosters and even team statistics were brought up to the real-world first 8 weeks of the season. All someone needed to do was just hit the download button and the save would be transferred to the memory card. Nice and easy. 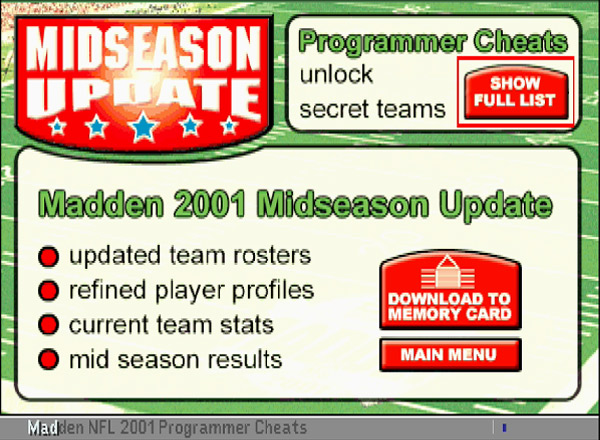 From within the update menu – or back at the main menu – there was a screen for various Programmer Cheat codes that would unlock different teams. 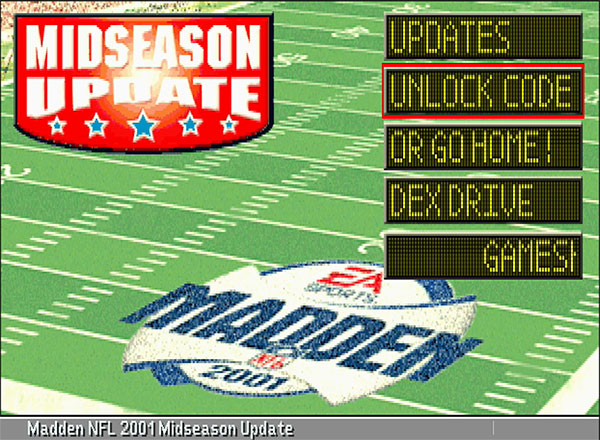 This was a huge promotion that revolved around earning points for Interact Accessories and GameShark purchases. Almost nothing was out of bounds; controllers, arcade sticks, Dex Drives, and more were all available for point redemption. The points could be redeemed for items, as well as enter customers into giveaways.

I honestly don’t recall anything after the initial hype and marketing assets were made, but I’m fairly certain it didn’t work out like planned. I can’t fathom how much Interact paid for the celebrity endorsements and photography work.

The Dex Drive was a Memory Card accessory that let you back-up your PlayStation Memory Card saves to a PC. From there you could archive them, or trade them with friends via e-mail or even post them online for download.

Try Out The GameShark…With One Code.

Loading the GameShark option would give you the actual GameShark operating system with a single code to unlock all the Madden Cards. Once you activated this, you would toss in the Madden NFL 2001 disc and play as normal.

And…that was it. The amount of man hours that went into sitting there and editing all the stats was more than likely never truly recovered in sales. Copies of the disc can be easily found online and after the first use is essentially useless. A $10 physical commercial that was a novel idea and then never tried again…despite advertising there should have been.